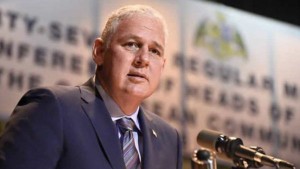 Prime Minister and Minister of Finance Allen Chastanet late Tuesday presented his first ever budget to Parliament with a promise to pursue an aggressive pro-growth strategy, so as to return  confidence and prosperity to the country. 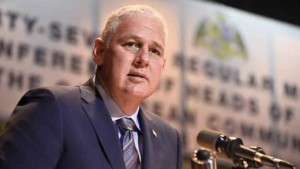 In a presentation lasting just over two hours, the Prime Minister stressed that the governments’ plan must be led by a competitive private sector ably supported by a responsive, efficient and effective public sector.

“The current cycle we find ourselves in of low growth, and increased deficit has crippled the government’s ability to provide basic services, such as globally competitive education, security for our people, road infrastructure and social services,” he said, warning that “if we make no  change the quality will continue to decline.”

Of the total amount budgeted for in the fiscal year 2017/18, recurrent expenditure accounts for 76.1 per cent and an amount of EC$1.151 billion is allocated while the amount allocated for Capital expenditure is EC$362 million representing 23.9 per cent of total expenditure.

In terms of the allocation of expenditure, the Economic Sector Departments are poised to receive the largest share of total expenditure in the amount of EC$899.6 million or 60 per cent.

The Ministry of Finance will receive the largest share of this amount totaling $499.2 million  of the total expenditure for the economic sector.

The Department of Economic Development, Transport and Civil Aviation the sum of EC$67.8 million for Capital Expenditure, of which EC$27.5 million is to be allocated to the Disaster Vulnerability Reduction Project (DVRP).

The objective of this project is to reduce vulnerability to natural disasters and climate change, while  an allocation of EC$19.1 million will go to  the St. Jude’s Hospital Reconstruction Project and EC$19.2 million for the Constituency Development Programme.

One major revenue measure outlined in the budget is an excise tax on gasoline and diesel which will be increased from EC$2.50 a gallon to EC$4.00 effective June 2017. The Prime Minister explained that the revenue will be used to maintain the country’s road network which has come under tremendous pressure from the rapidly increasing number of vehicles on the road.

He said that tackling the national debt which stood at EC$3.2 billion would be a priority for his administration as for far too long successive governments have only paid lip service   and allowed the problem to get worse.

“This government will not let another term go by with no decisive action. To do so would be to undermine our fiscal reform effort, and to jeopardise the potential that this country has, to enter into a new era of   sustained higher economic growth. We owe this to future generations and we must tackle it now.”

The Prime Minister said that govermnet has developed a Medium Term Debt Management Strategy (MTDS) to address this situation the objective of which is to analyze the costs and risks inherent within the debt portfolio, referencing the interest rate risk and refinancing risk.

“This strategy document comes against a background of adverse economic and financial developments within the ECCU including St Lucia.  The management of the debt programme involves the design and implementation of debt strategies which will effectively align the debt level with fiscal sustainability.”

He however stressed that to solve the debt problem “we will have to do our fair share as a Government and as a people. We cannot do it alone. To restore the public finances we must recognise that our fiscal stability is a shared interest for all stakeholders in our economy. We will have to act in partnership with the private sector, and with our bilateral and multilateral stakeholders. The burden of adjustment will have to be shared by all.”

Chastanet said he plans to announce several initiatives which we believe are necessary to place our debt on a sustainable path over the next few months.

He cautioned about the need to excise “fiscal responsibility and discipline” and announced plans for the closure of a number of government agencies, coupled with an elimination or reduction of transfers, or privatization.

Among the agencies targeted the debt ridden St.Lucia Tourist Board which will now evolved into a Tourism Authority, the St.Lucia Marketing Board, Radio St.Lucia, the National Trust, the St.Lucia Fish Marketing Corporation, and the St.Lucia Postal Services.

He unveiled the long awaited road map for the building of a new St Lucia, which involves specific plans for this year as well as the strategic priority areas for the next four years including Creating Sustainable Employment, Social engineering, tourism, agriculture, security and justice, energy and climate change.

The Prime Minister expressed government’s determination to lift the country out of “economic quagmire” indicting that the economic situation was far from what his government had expected.

He cited a huge debt, low growth and productivity and high employment as the major contributing factors.

Chastanet in outlining governments fiscal strategy identified what he said was a medium term plan aimed at crafting a clear path towards growing the economy while improving the islands fiscal and debt position.

“While some measures have been taken to curtail expenditure while improving revenue intake, we are still spending more than we collect in revenue resulting in increased borrowing and higher public debt.

“The low levels of economic growth have not helped in correcting our fiscal imbalance. Hence the fiscal strategy that we will adopt entails a two-pronged approach of increasing the level of growth while improving the productivity of expenditure.”

Chastanet said government will soon be introducing  a new Public Financial Management Bill, which will require the Minister for Finance to report to Parliament no later than one month after the second quarter of every financial year on the state of the public finances.

” My Government has made tax reforms a major priority over the medium term.  In this regard, work has already commenced in a number of areas geared toward improving competitiveness and stimulating growth.”

He said in addition to the reduction in VAT from 15 to 12.5% which went into effect from February 1st this year, Government had designed a VAT deferral system to minimize the impact of the VAT obligations faced by manufacturers.

“This system will eliminate the VAT payments imports  of raw materials and no such payment is required subsequently to the extent that the manufacturer is allowed to claim the full input VAT,” he explained.

Prime Minister Chastanet also announced plans to “pursue with urgency” a social safety net system for the lower income group in the society.

He admitted that one of the challenges that I foresee in pursuing government’s policy agenda is implementation.

He said it is no secret that successive governments have suffered from a serious implementation deficit and this has seriously affected their ability to implement projects in a timely and costefficient manner.

“My Government’s mantra Madam Speaker is “execute, execute, execute”.  We intend to put in place the institutional framework and strengthen capacity to enable us to accelerate the pace of implementation.”

The Prime Minister noted that the transformation programme that his government will put in place will require bold, courageous and decisive leadership.

“Our Government shall provide this leadership Madam Speaker my Cabinet of Ministers and I intend to be the champions of our reform and change agenda,” he said.