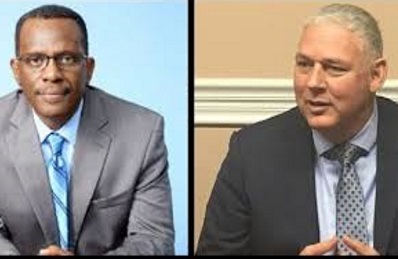 In the May 29, letter, Pierre reiterated the position of his opposition St. Lucia Labour Party (SLP) that it is not opposed to any development which is ‘sustainably beneficial’ to the country.

“To this end, we are prepared to support the government in any meaningful initiative,” the letter stated.

However, it made clear that the SLP is not prepared to support any development which brings little or no benefits to the island or worse, place the country at risk both economically and with regard to its national security.

The letter made specific reference to the controversial US$ 2.6 billion Desert Star Holdings Limited (DSH) project, which the SLP has expressed strong opposition.

“We cannot in good conscience support that the vast majority of the available lands in the south of the island to be owned and developed by a single entity, thereby rendering competition obsolete,” Pierre wrote.

“Further, we view as unacceptable the leasing of the vast majority of the land for such an extended period at the extremely low cost of US$1:00 per acre,” Pierre said, adding that the project places St. Lucia at great risk.

But the government has said in the past that the proposed DSH project is indeed a significant project, which is anticipated to advance the socio-economic status of the southern part of the island.

Last July, the authorities here announced that the multi-billion dollar project will occupy a 700-acre site and will include a marina, a racecourse, a resort and shopping mall complex, casino, Free Trade Zone, extensive entertainment and leisure facilities, as well as architecturally designed villas and apartments.

“Overall, the Pearl of the Caribbean Development is designed to be a well-balanced project with open space making up over 50 per cent of the overall development. It is designed to be a sustainable and self-contained development and is expected to generate between 500 to 800 jobs in construction during its initial phase of implementation,” according to the statement by Invest St. Lucia

The Hong Kong-based DSH financed project has attracted both supporters and detractors with former prime minister Dr. Kenny Anthony warning in January that there will never be peace in Vieux Fort and St. Lucia if the deal is not renegotiated and the project redesigned.

Pierre warned that the negative fallout will have severe consequences for this country both in the foreseeable and unforeseeable future and reiterated a call for the contract to be laid and debated in the Parliament of Saint Lucia.

Pierre’s letter also mentioned the proposed dolphinarium to be located at Pigeon Island National Landmark, asserting that the SLP will join with the St. Lucia National Trust (SLNT) in doing all that can be done legally to prevent the project from going through.

In addition, the SLP leader repeated his party’s objection to the removal of the SLNT’s annual subvention.

He said other national issues include the non-election of a Deputy Speaker of the House of Assembly describing the development as a “stain on our democracy.”

Pierre said the SLP would be grateful for an opportunity to discuss the matters with Chastanet at a mutually convenient date.