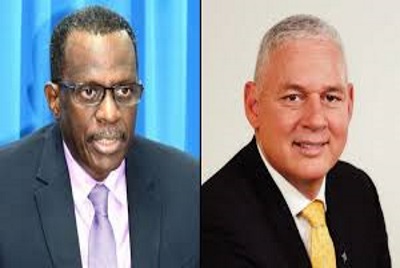 The main opposition St. Lucia Labour Party (SLP) has defended its decision to walk out of the Parliament on Tuesday claiming that Prime Minister Allen Chastanet has shown “utter contempt and disregard for the people of St. Lucia and the parliament of St. Lucia”.

Opposition Leader Phillip J. Pierre told a news conference that the action was taken after the government had moved to prevent opposition legislators from making their contributions to the budget debate.

“It is a convention and normal that after an Opposition member speaks, a member of the government responds. Again, we came willing and able to speak to the issues of the budget but the prime minister, in his normal vindictive and spiteful manner, because he has the power of rebuttal, refuses to allow four senior members of his government to speak,” Pierre said.

But Chastanet dismissed the allegations that he had broken convention saying that when the opposition had been given the opportunity to speak, no one wanted to do so and so he closed the debate.

He said that based on the House of Assembly’s Standing Orders there is no speaking order.

“So generally, we have said, if in fact we have eleven (members) and they have six then two of my people would go to one of theirs. So if you take that mathematics and apply to the fact that we have done seven already, they’re two speakers behind,” he said, accusing the Opposition of both adhering and abandoning conventions when it suits them.

Pierre told reporters that it was the “first time” a government’s first budget debate was adjourned by 40 days and warned that such a situation has “serious implications for the country.

“We can only say that it was adjourned because of spitefulness and vindictiveness and the prime minister wants to make a point that he is in charge,” he said, adding that the debate had ended without the country hearing from four senior government ministers, including the former prime minister Stephenson King.