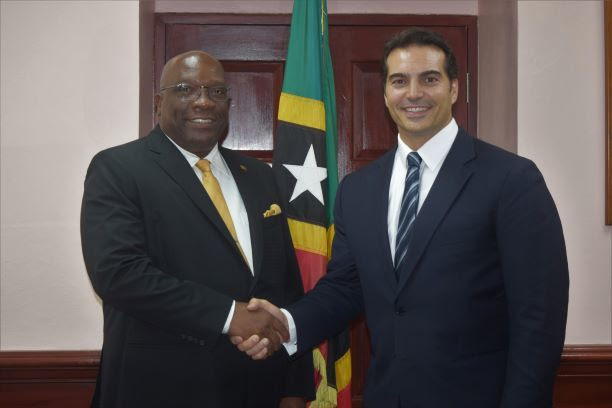 High level officials of Scotiabank are in Federation to finalize matters relating to the wrap up of their operations and the transfer of their operations to one of the region’s premier financial institutions, Republic Financial Holdings Limited (RFHL).

While in St. Kitts and Nevis, the visiting officials – Mr. Stephen Bagnarol, Senior Vice President and Managing Director of Scotiabank Trinidad and Tobago and Mr. David Parks, Managing Director for the Eastern Caribbean – called on Prime Minister Dr. the Honourable Timothy Harris on Wednesday, October 30 at his Government Headquarters office. The Country Manager at Scotiabank, St. Kitts and Nevis, Mr. Gordon Julien was also present at the meeting. 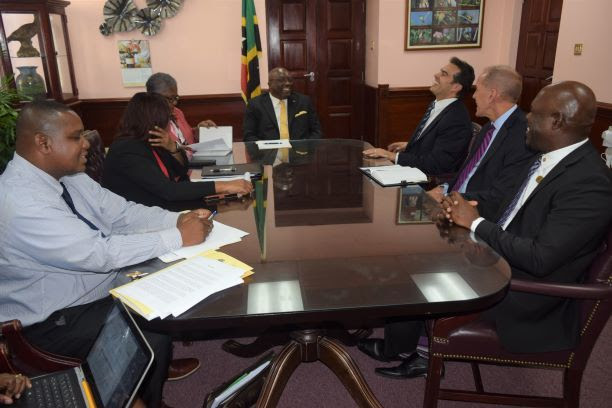 The visiting banking officials thanked Prime Minister Harris and the Government of St. Kitts and Nevis for their support and accommodations throughout the entire process.

The Trinidad-based Republic Financial Holdings Limited announced in November of 2018 that it had entered into an agreement to acquire Scotiabank’s banking operations in nine Caribbean territories, namely: St. Maarten, Anguilla, Antigua and Barbuda, Dominica, Grenada, Guyana, St. Kitts and Nevis, Saint Lucia, and St. Vincent and the Grenadines.

In a press statement issued on September 07, 2019, the Eastern Caribbean Central Bank (ECCB), which is the regulatory authority,approved the application for the transfer of the assets and liabilities of the Bank of Nova Scotia (BNS) to the Republic Financial Holding Limited in Anguilla, the Commonwealth of Dominica, Grenada, St. Kitts and Nevis, Saint Lucia and St. Vincent and the Grenadines, pursuant to Section 43 of the Banking Act.

The ECCB further stated it“believes that Republic Bank’s corporate banking record and its extensive network of correspondent banks will bode well for the ECCU banking sector.”

In previous discussions, RFHL executives had outlined the institution’s commitment to welcoming all of Scotiabank’s staff into the Republic Group.

Scotiabank has operated in St. Kitts and Nevisfor some 36 years.

Prime Minister Harris was supported in Wednesday’s meeting by the Cabinet Secretary, Mrs. Josephine Huggins; Mrs. Hilary Hazel, the Financial Secretary in the Government of St. Kitts and Nevis and Comptroller of the Department of Inland Revenue, Mr. Edward Gift.