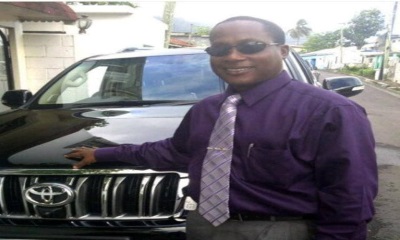 The St. Kitts-Nevis government has condemned the murder of a senior police officer, who was shot and killed during an apparent robbery during the early hours of Saturday.

Sergeant Leon Dasent Powell, 44,  became the 18th murder victim in the Federation when armed masked men attempted to rob his bar. A struggle ensued and he was shot several times. The former security officer for former prime minister Dr. Denzil died at the scene.

In a statement, Prime Minister Dr. Timothy Harris extended condolences to the family and reaffirmed his government’s commitment “to fully supporting the brave and steadfast security forces as they endeavour to defend the safety and security of our great country”.

Harris said he was encouraging eyewitnesses to the tragedy to “provide any information that they deem useful or relevant in clarifying the circumstances around Sgt. Dasent Powell’s tragic death.

“If you saw something or know something, please contact a member of the Police High Command or Crime Stoppers,” he said.

The statement noted that the Royal St. Christopher & Nevis Police Force “united in grief…is dedicating its resources, attention and priority to investigating the circumstances that led to Sgt. Dasent Powell’s untimely death and bringing to justice the persons responsible”.