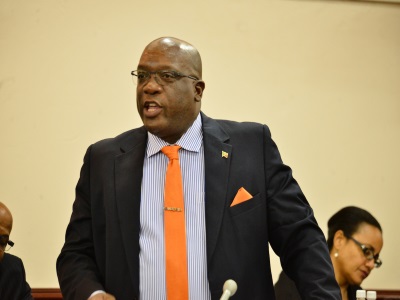 rime Minister Dr. Timothy Harris Wednesday said his administration is using the option available to it on whether or not to make public the International Monetary Fund (IMF) report on the 2017 Article IV Consultation with St. Kitts and Nevis.

“We are not the only country in the last five years who have exercised that option. The IMF reports in particular indicate where there are special circumstances they have obliged in the non-publication in the non-publication of reports for the very reasons the financial secretary says,” Harris told a news conference.

He said the Washington-based financial institution is “not doing an audit, the IMF is doing surveillance, the IMF is providing advice and in some of those areas of advice we have to take time to study them and we have therefore exercised that prerogative with respect to St. Kitts-Nevis”.

Earlier, the island’s financial secretary, Hilary Hazel, said that the government continues with its consultation with the IMF “as with any other country that is a member of that body.

“It is also important for us to note that the IMF is not the only credible source of information on the economic performance of the Federation of St. Kitts-Nevis. In fact the economic data that is gathered and distributed by the government…is shared with all our relevant economic partners,” she said including the Eastern Caribbean Central Bank (ECCB), the Barbados-based Caribbean Development Bank (CDB) and the Economic Commission for Latin America and the Caribbean (ECLAC).

The financial secretary said therefore it was important to put things into “proper perspective” adding “The IMF is not an auditor of the government”.

She told reporters that the director of audit is the only authority “to audit the books of the government.

“The IMF however continues to be an important partner in respect of the economic surveillance, policy advice to the government and also the provision of technical assistance to the countries that hold membership to it.

‘Government has the option to publish or not to publish. It has exercised it. At this point in time as I told you we continue to have consultations with that body,” she said in a response to why the report of the IMF delegation that ended its visit here since June last year, was not being made public.

The main opposition St. Kitts-Nevis Labour Party (SKNLP) has called on the government to make public the report, contending that the Harris administration was blocking its publication because of the present situation of the economy.

Last November, Opposition Leader, Dr. Denzil Douglas said the country needed to be aware of the issues raised by the Washington-based financial institution and that he has written to the IMF on the matter.

“I believe there is more in the mortar than the pestle and as a result of that I would want to the inform the general public that I have written off to the International Monetary Fund on this particular matter and you will hear more about it at a later tim,” Douglas said then.

But during the news conference. Prime Minister Harris rubbished the idea of suppressing the report saying that his administration was using the same senior public servants, including Mrs Hazel, who were instrumental in preparing financial reports during the period of the last administration.

”She is best placed, she is the financial secretary that we met when we came to office. We have had every reason to repose our confidence in her capacity and that of her team,” he said, adding “if there are those in the public space and in particular the public market place who have a problem with the quality of their work, I wish they will have the courage to say what is the problem they have with their work”.