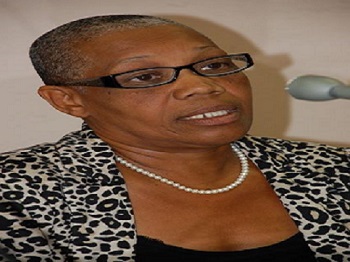 The main opposition St. Kitts-Nevis Labour Party (SKNLP) has accused the Speaker of the National Assembly, Michael Perkins, of allowing Tuesday’ sitting of the parliament to be used as an occasion to bash Opposition Leader Dr. Denzil Douglas, whom government legislators have said is in possession of a diplomatic passport of a foreign country.

Former speaker and SKNLP chairman, Marcella Liburd said what took place in the National Assembly is reprehensible “with the full consent and collusion with the Speaker.

“Every agenda item takes the form of a political meeting. It does not matter whether the agenda item is announcements by the Speaker, statements by ministers or speaking on the adjournment,” said Liburd.

Attorney General Vincent Byron Jr. told legislators that the Timothy Harris government “is deeply concerned that we should have someone who sits in our Parliament who is in a position to be disqualified”.

He said that as such, in his capacity as Attorney General, the government has sought legal advice and has “begun proceedings to go to the Court under Section 36 of the Constitution.”

Leader of Government Business, Eugene Hamilton, who wrote to Perkins on the diplomatic passport issue, said that “there’s every good reason for any constituent and citizen, and every good reason for the Office of the Attorney General to institute proceedings against Dr. Douglas, and I would expect no less as I am uncomfortable with having him – or anyone for that matter – sitting in this Parliament in violation of our Constitution.”

Prime Minister Harris had last month told reporters that Dr. Douglas held, and has travelled on a diplomatic passport issued by the government of Dominica on July 30, 2015 and that his government is moving to the High Court to have him removed from the National Assembly.

But, Liburd said that citizens of the twin-island Federation “are frustrated” with the antics of the government whose “strategy…is to blame Douglas for everything that goes wrong, insults him and criticises him in every way possible.

““The government has become worn out with that game. The Team Unity ministers had a tirade about ‘Dr. Douglas, Dr. Douglas, Dr. Douglas’ and their supporters are now saying to Timothy Harris ‘you have been there for almost 3 years now and you are still to tell us what are you doing to improve the lives of the people of St. Kitts and Nevis”.

She said that the Speaker uses the National Assembly “to shut up the opposition” adding “democratic principles have gone through the door.

“Nothing call democracy is in the National Assembly. Every item on the agenda is an opportunity for government ministers to abuse people, to insult people and to criticise people with the full support of the Speaker whether you are present or not.