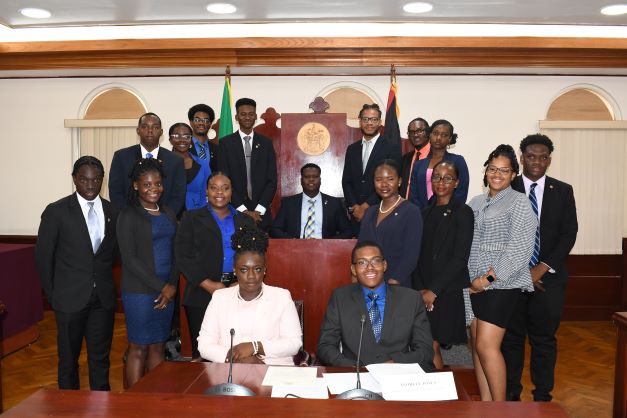 The Joint Youth Parliament Sitting was held in commemoration of St. Kitts’ Youth Month. The members debated and successfully passed the Age of Minority (Amendment) Bill 2022. Two resolutions were also debated and passed.

The relationship between the 21-year-old SKNYPA and the three-year-old NYPAAB was formalized earlier this year. NYPAAB President, Kamalie Mannix, welcomed the partnership and touted the experience at today’s joint youth assembly.

“If we had to rate it 1 out of 10, I would say it was 100,” President Mannix stated. “The members on both sides performed absolutely excellently.

There was the mastery of Standing Orders, Parliamentary Procedures, that you could see throughout the debate and of course, you had the very high commendations coming from individuals who were in the gallery and to the point where I think even the contributions of the members caused them (policymakers in the gallery) to pause and reflect … I think it was a very positive experience and I think we are setting the stage for [the] future.”

SKNYPA’s President Knight noted that the experience exceeded his expectations and he is extremely proud of the collaboration.

“This is our contribution to regional integration. It doesn’t take big things necessarily to show that the Caribbean can work together and that is one of the reasons why I am so proud of the Organization of Eastern Caribbean States (OECS).

As eight Small Island Developing States (SIDS) we are doing such great things on a grand stage,” President Knight stated.

At the end of the joint sitting, SKNYPA and NYPAAB signed a Memorandum of Understanding formalizing their collaborative relationship in several areas. One area is an agreement to host a joint youth assembly every year.

The organizations are also seeking to establish relations with youth parliament associations in Anguilla, Montserrat and Dominica.