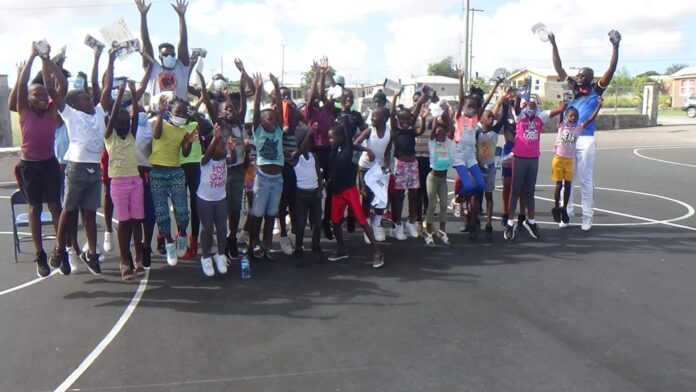 More than 50 youngsters have been advised to have a game plan for their careers, be proactive and seek advice as they endeavor to develop their fledging sports potential.

Simultaneously, there has been an impassionate plea for the revival of sports at the grassroots level after the two-year induced lockdown necessitated because of the novel coronavirus (COVID-19) pandemic.

“You need a blueprint, a plan. You need to be offensive. And you need a coach, someone to advise you,” said Kisma Panthier-Jn Pierre, an educator and motivational speaker.

“We need a programme to get our children back on the playing fields and on the courts,” said Lucaso Brumant, president, CPTSA Wings Sports Club.

The words of encouragement were delivered at the closing ceremony on Saturday 8 January 2022 for a sports development camp organised Helping Hand Foundation, a community-based charity organization which promotes education, sports, culture, and health.

Jn Pierre, who told the participants that she endured a low-esteem and had to borrow a neighbour’s shoes to do physical education while attending primary school in Dominica, used her life experiences to encourage them to raise above their challenges in life.

“I remembered those Thursdays when I had to borrow my neighbour’s shoes,” the entrepreneur and best-selling author recalled.

She also recounted how her peers “bullied” and mocked her name in a derogatory way, but said she wasn’t deterred in becoming a success in life.

Brumant, wo has more than 40 years in sports as a player, coach and administrator, bemoaned too may former athletes are not giving back to the discipline that gave them an opportunity.

“We need more people to become involved and do more to assist our youngsters,” the basketball and volleyball coach said.

HHF founder and president Colin James, a veteran sports administrator and coach, spoke of the importance of grassroots programmes to hone the skills of those between five and 15 years which is referred to as the golden age for learning.

“What you are doing at your age is at the right time for your future development,” James said. “Let me call on parents, teachers and principals to understand the importance of sports and education.”

The five-day camp spread between Dec 29, 2021, and Jan 8 touched on the fundamentals of basketball tutored by Oslyn Gregory, Guy Yearwood Jr and Tyea Ladoo; tennis coached by Larry Michael and netball conducted by Christine Lloyd.

Kajah Jarvis was adjudged the best female basketball player and received an android tablet along with Jermaine Crump who was named the most improved male player.

In tennis, Serenity repeated her award while her younger sister, Nefas Colbourne, was the most improved. Tyreke Quinnland was recognized as the most disciplined boy.

US-based volleyballer Adrian Constant, who’s attending Midwestern State University in Kentucky, was also recognized at the closing, as he introduced to the participants as an example for them to emulate.