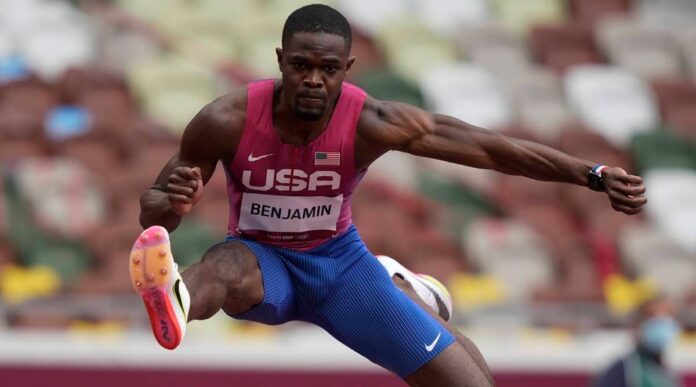 LA TIMES, TOKYO — It might take a while. A few weeks. Several months. Perhaps years.

At this point, Rai Benjamin is only starting to process what happened Tuesday at Olympic Stadium in the men’s 400-meters hurdles final.

Benjamin ran the most important race of his life. On his sport’s biggest stage. Posted a world-record time.

In perhaps one of the greatest races in Olympic history, Karsten Warholm of Norway held off Benjamin and a blazing field to win in a world-record time of 45.94 seconds.

“If you would have told me I was going to run 46.1 and lose, I would probably beat you up and tell you to get out of my room,” Benjamin told reporters.

And if someone had told Warholm that Benjamin would run that time?

“I would have put myself on the first flight home,” Warholm said.

Instead, Warholm went somewhere no man had gone before in the 400 hurdles: under 46 seconds.

Consider: The world record in the 400 meters is less than three seconds faster — and runners don’t have to negotiate 10 hurdles.

The 400-meter hurdles final wasn’t the only event Tuesday that offered a glimpse of what’s to come in track and field in the next few years.

Athing Mu, a 19-year-old from New Jersey, remained on track to become a possible face of the sport by winning the women’s 800 meters, the first American to do so since Madeline Manning in 1968 at Mexico City.

“This is just the beginning, there’s more,” Mu said, adding, “My time is now.”

After holding off Benjamin down the stretch, Warholm looked up at the videoboard to see his winning time.

Benjamin ran faster than Kevin Young’s Olympic-record 46.78, a mark set at the Barcelona Games in 1992 that stood for nearly 30 years. So did Alison Dos Santos of Brazil, who finished Tuesday’s race in 46.72 to win bronze.

But that was not fast enough.

A composed Benjamin, who competed in college at UCLA and USC, repeatedly said he would need time to process what happened and why.

“The kid’s amazing, man,” he said of Warholm. “You can’t be mad at all. As a competitor, it hurts a lot, but that’s just the nature of the sport.”

Benjamin described it as “the best race in Olympic history,” adding with due respect that Young and 400-meter legend Edwin Moses “could not run what we just ran.”

Benjamin said he could not sleep the night before the race because the anticipation was so great. The eight runners in the final are all “cool with each other” but were silent in the call room before the race, he said.

But before the race, Benjamin said Warholm advised, “Let’s go out and have some fun.”

Warholm, running in lane six, pushed the pace from the outset to stress Benjamin in lane five and other runners as well.

Benjamin said he made a small error at the fourth hurdle, giving Warholm the slightest edge.

“Everything is just like white noise,” Benjamin said. “I didn’t hear anything; I didn’t see anyone until hurdle seven. And at that point it‘s just like, ‘I’m behind and I’ve got to just go get that guy.’”

Warholm knew Benjamin would be coming.

“I ran sort of scared,” he said, “but that’s something that I always do.”

As they cleared the final hurdle, “I just ran with my life,” Warholm said. “I would die for that gold medal.”

Benjamin gave chase. But he could not close the gap.

“Just ran out of real estate,” he said. “I was running my butt off coming home and just didn’t have enough space.”

Benjamin’s Olympics are not over. He said he would run in the 1,600-meter relay, so there is another shot at gold.

And there are more duels with Warholm ahead. The 2022 world championships will be held in Eugene, Ore. The 2024 Olympics in Paris are only three years away.

Despite his disappointment, Tuesday’s historic race set the stage.

“It just goes to show where we are in the sport,” Benjamin said, “and where the event is going.”

The cricketing memories of Rai Benjamin are grainy. The American 400m hurdler remembers Brian Lara. “So hypnotic to watch”. He wrestles with his memory to fish out another name. “Forgot his name, but there was this guy with curly, coloured hair with a slinging action. I have seen him once or twice at North Sound.” Turns out to be Sri Lanka’s Lasith Malinga.

Rai, though son of former West Indies fast bowler Winston and having spent his childhood and much of his teenage in Antigua, is “not a cricket person”. “I was never so much into cricket, might have played a few games during carnivals and Sunday afternoon festivals,” he says during a media interaction before the Tokyo Games, where he is among the favourites to finish in the top three.

His father dismisses his son’s cricketing abilities in two words. “Absolutely crappy.” Even when Rai played cricket, he never tried hurling the ball as fast as his father would in his peak, but was a batsman who liked to swish and swipe. Winston did not impose cricket on him either. “In West Indies, we don’t do that. We let them be whatever they want to be. I don’t even talk cricket with him,” says Winston. He did not feel dismayed when his son chose athletics, though he was disappointed when his second son Jaeo swapped the leather ball for track spikes. “He was a fast bowler, and was really talented,” the father says. 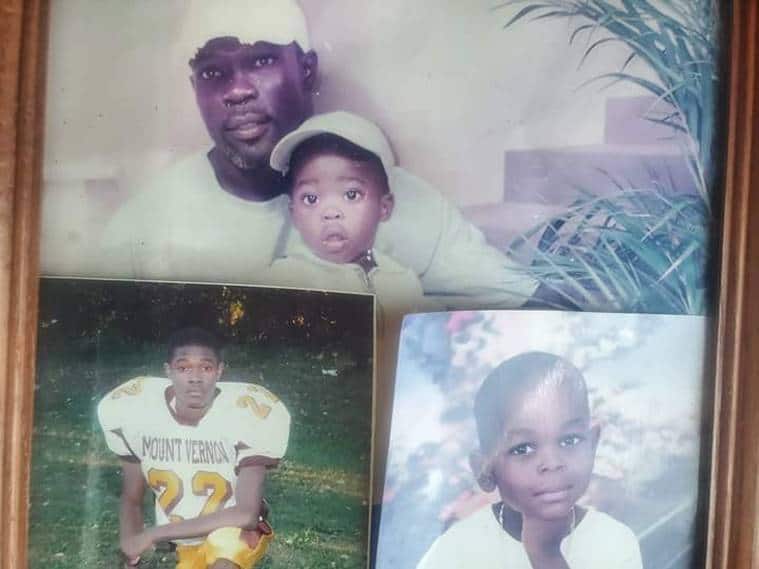 Yet, the last time they met — Rai stays with his mother Gale in New York — during Rai’s graduation ceremony two years ago, their conversation unusually veered towards cricket. “We were talking about the ups and downs of life, and then the topic drifted to my cricketing career, about the life lessons I learned from the sport, about dealing with success and failure, and about being grounded in life. We might have played different games, but there are things that are common in every sport, and he won’t commit the mistakes that I have in mine,” Winston recounts.

He does not reflect too much on his own career — a phase that’s long gone — but his career ended unfulfilled. Touted as the successor to Malcolm Marshall, short in build but blessed with chilling pace and ability to swing the ball when conditions obliged, Winston played his last Test match at 30, with only 61 wickets at 27. He made little money from cricket, and later on in life had to juggle multiple jobs, including as a boundary fixer at the old Antigua Recreation Ground. “Mine is not an ideal template for a sportsman. But maybe, he (Rai) can learn from my failures,” he says.

There is one trait, though, Rai has inherited from his father. The love of speed. Winston tried to bowl as fast as he could, he consistently clocked upwards of 140kph and after retirement, began rearing prize-winning racehorses; Rai tries to run as fast as he could too, leaping over hurdles with blistering pace. He has to his name the third-fastest run in the history of his event, when he timed 46.83 seconds in the US trials at Eugene, Oregon, last month. After the race, Rai told the press that he was running within himself and could go even quicker. “If I would have broken the world record, what would I have done in Tokyo? It’s just more fuel for the fire, man, I can run so much faster,” he said.

It sets up an intriguing tussle with chief adversary Karsten Warholm of Norway, who set the world record (46.70) the same day Rai recorded his personal best. Then, there is Brazil’s Alison dos Santos and Qatar’s Abderrahman Samba, thus brushing 400m hurdles with a coat of unprecedented glamour.

After winning his heat on Friday with a timing of 48.60 seconds, Rai is one step closer to a duel with Warholm and the other top contenders in the final on Tuesday.

Rai sounded cautiously confident: “I don’t go to a race thinking that I should create a record. It’s something that just happens. The ambition is always to be the best, if you break a record while doing that, it’s great.”

In his son’s quest for speed, Winston sometimes relives his own younger days. It makes him feel younger, he says. “It’s so joyful, his strides are so graceful. You can keep watching it over and over without getting bored,” he says.

But he is not obsessed with his son winning each and every tournament. He rarely watches him live. “Most of his stuff happens in Europe and because of the time difference, it happens either too late or too early for me. I am not going to lose sleep over him. I wake up the next day and watch his clips on YouTube,” he says.

However, Winston yearned to watch him in flesh and blood in Tokyo. “I was desperate. One I wanted to watch him run in an Olympics. The next, I have not seen him in two years, two long years. And I don’t know when I can meet him next,” he says.

He is used to the long wait, as Rai’s early life was spent travelling back and forth between New York and St John’s. He was four when he first arrived in Antigua, a journey that took a week as the flight was stuck in Puerto Rico soon after the September 11 attacks. “An anxious, dark time,” says Winston.

Till he turned nine, Rai stayed with his uncle in Antigua, and then flew back to the US. It was then that he became addicted to American football. “He was a quarterback, and I thought this might be his future. But his mother was afraid of him getting concussions, and she persuaded him out of it. And then the college coach spotted a track athlete in him,” Winston remembers.

He credits Gale for Rai’s success. “She’s a wonderful human being and a loving mother. In America, we could have easily lost him. There are so many distractions. But she did a terrific job in raising him as he is now and had worked really hard for him,” he says. Rai then returned to Antigua and represented the country of his origin in a few tournaments, but frustrated with the system, switched allegiances to the US. Winston has no hard feelings, and says it was a straightforward decision.

“He was born in America, he is free to choose the country he wants to. It does not make him less Antiguan or more American. If he wins a medal, Antigua will celebrate as much as America,” says Winston. And that, he says, will be the proudest moment of his life.