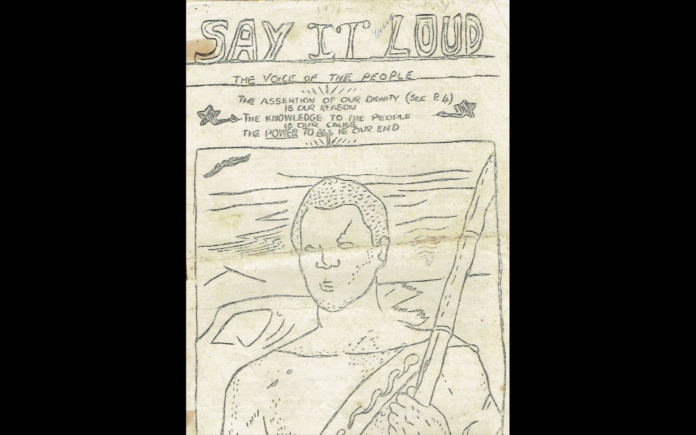 It was way back in 1970 that I first met Franklyn  ‘Frankie’ Francis, a teacher of  West Indian History,  at the Antigua Grammar School.  I was attending the Princess Margaret School, but I came to know him through Harold Lovell, a new friend of mine, who had come to live in Gambles Terrace, just up the road from my school.

It was the Black Power era.   A time of black consciousness, African awareness, the Civil Rights Movement and the recent assassination of Martin Luther King. It was the era of the Black Panther Party, the Peace Movement, the Hippies, etc.  The young black working class in the Caribbean was in fighting mood.

The ‘conscious’ lyrics of reggae and the words of the Rastafarians were just getting here in Antigua and Barbuda, and calypsonians were not left out of the new cry for social justice and freedom. In the USA, in 1968, soon after MLK’s assassination, James Brown sang “Say it Loud, I’m Black and I’m Proud”.  It was the first ever such bold and assertive statement to make a hit in the popular music.

Early in 1971, Lester Flax, Harold Lovell and I, under the guidance of Frankie Francis, our editor, began publishing a pamphlet called “Say it Loud”, with a cover drawing of Joseph Cinque’, who in 1839 led a successful slave revolt aboard the Spanish slave ship, the Amistad.

I can remember the late Leonard Tim Hector coming to teach West Indian history at the Princess Margaret School that same year, just after our first or second mimeographed issue, and donating the money to buy the paper for the following one.

I now hear Harold Lovell paying glowing tribute to King Franki as a “deep thinker” and “intellectual”, just as he paid glowing tribute to Tim Hector as a man of “intellectual honesty”.  Lovell is also the man who ran in the 1980 general election on the ACLM platform, was a Central Committee member of the ACLM, yet claims that his politics began in the early 1990s with the UPP. I suppose then, that all that came before that time were just misguided associations of his youthful years.

For the ten years and three extra months that Lovell’s UPP was in power, did he remember King Franki’s  intellect?  Did he remember that the man with whom he traveled all over Jamaica, playing six-base  “side by side” in UWI’s steelband, “jamming a wicked bass line”’ was at that time “doing post graduate work in Development Economics”?  Or, that he had  “a clear understanding of the global political economy?”

How comes it, that he’s not known to have recommended King Franki as the appropriate Francis when there was talk of a National Social and Economic Commission?  How come King Franki’s “deep” thought and “intellect” did not seem to qualify him for any significant intellectual, or, any other role, when Lovell was in power?  Well, at least, we never heard of any effort in that regard.

How can one disregard one’s early mentors, find them of little value while they are alive, see no contribution that their talents can make to the advancement of the society, even when one is in power, and then claim that one is grateful to them “for helping me become the person that I am”.

Obviously, you are not what those mentors would have expected you to become.