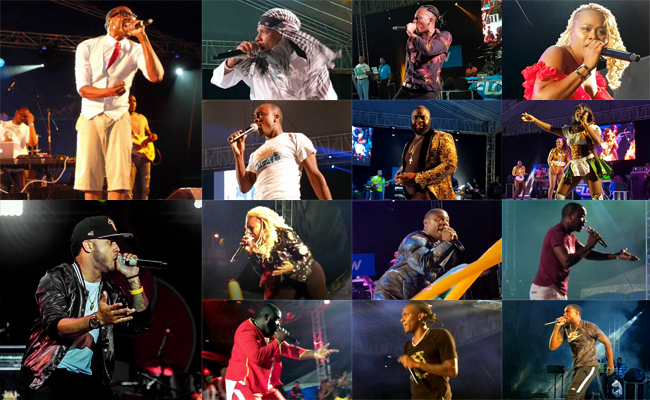 After a thrilling night of performances at the Antigua Recreation Grounds (Carnival City) last evening, the list of the 14 finalists for the Flow Party Monarch competition has now been completed.

Defending groovy monarch Tian Winter will compete in both groovy and jumpy categories. Also competing in both categories are Claudette Peters, Zamoni, Lyricksman and Menace. Kimmy makes her second party monarch finals in the groovy section with her song ‘Chug It’.

This year, the semifinal venue was changed from the Barrymore Hotel to the ARG and Flow Party Monarch chairman Herbert “Burga” Joseph expressed his pleasant surprise at last night’s turnout.

“I was impressed,” said the party monarch chairman.

“I didn’t expect that many people. The turnout exceeded our expectations by three. From where I was, the grounds looked packed.”

Despite the higher than expected turnout, most of the people entering the grounds arrived after 8 pm despite the listed start time of 7pm. The chairman explained that because of the late-arriving crowd that, “We had to make an executive to delay the start time of the show.”

“The artists need the energy from the crowd to perform, so we thought it prudent wait for the crowd to build before we start.”

The show began a little bit after 8 pm.

This year’s semifinals was also dubbed as a ‘cooler fete’ and Joseph felt that the concept helped boost attendance to the show despite saying that, “I wanted to see more coolers, but it’s still our first year.”

“No sense in reinventing the wheel. We reached out to the people at LOL to see how we could make our event as successful as theirs and we will only get better in years to come.”