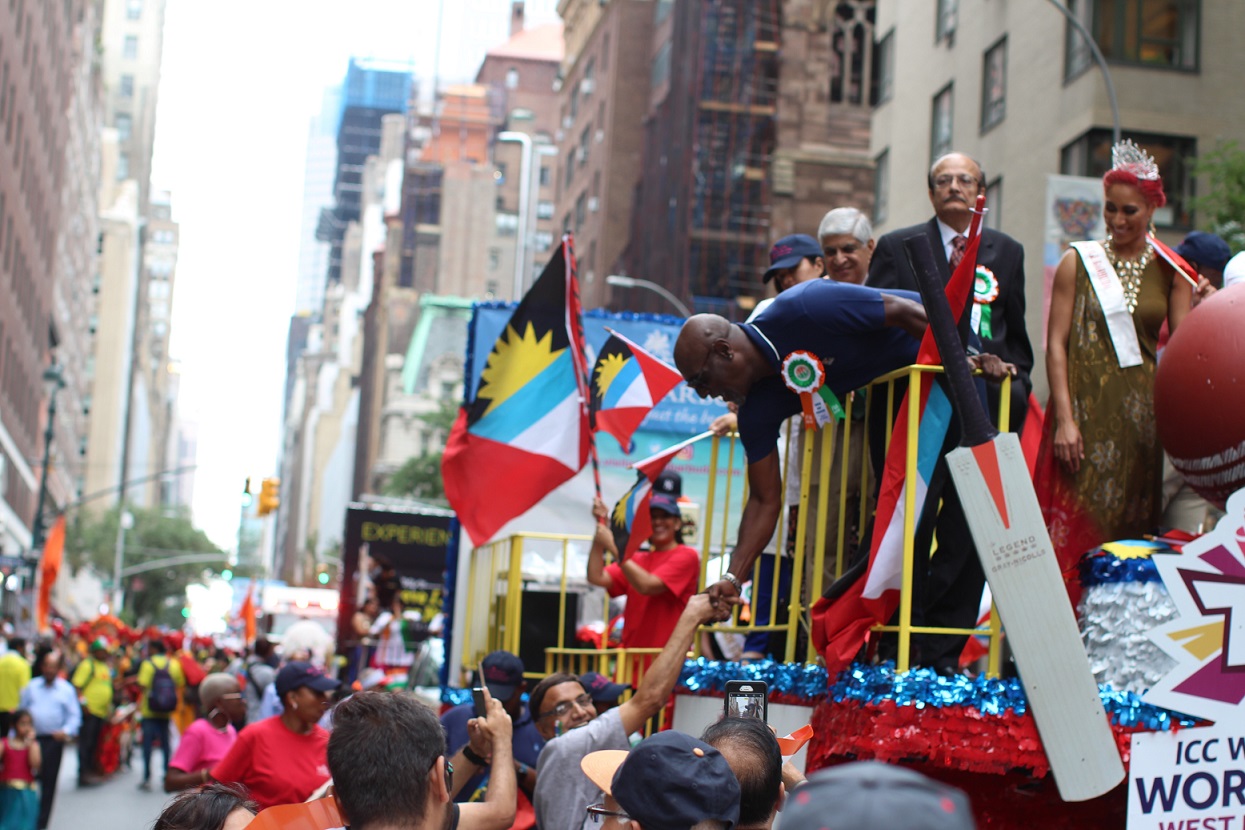 Antigua and Barbuda, Sir Vivian Richards, and the ICC (International Cricket Council) teamed up to promote the destination and landmark T20 World Cup that will take place in Antigua later this year for the 38th India Day Parade that took place yesterday, August 19, in New York City. The Parade, sponsored by the Federation of Indian Associations (FIA) is organized to commemorate the 72nd Independence Day of India. The parade is the largest celebration of India’s independence outside of India itself, with over 180,000 visitors each year.

The FIA represents more than 500,000 Asian-Indians in the tri-state area of New York, New Jersey and Connecticut. A large contingent of this community has a strong affinity for cricket, making it the perfect opportunity to promote Antigua and Barbuda and that they are hosting the ICC T20 Women’s World Cup in November. The semi-finals and finals of will be held from November 22 -24, 2018 at Sir Vivian Richards Stadium. The ICC T20 is of particular significance this year as it is the first standalone Women’s World Cup.

The Antigua and Barbuda float promoted the best that the destination had to offer as well as this exciting cricketing event. Sir Vivian Richards, one of the greatest cricket players in history, with Minister of Tourism and Investment, Hon. Charles ‘Max’ Fernandez, greeted the crowds and spoke at the review stand and podium during the 6-hour celebration. Fans swarmed the float along the route cheering for Sir Viv and the opportunity to greet him. Extra star power on the float was provided by Latisha Greene, former Miss Antigua and Barbuda and former Miss World contestant, as well as Antiguan DJ, Kareem Carr of ‘Trauma Unit,’ with support from the Antigua and Barbuda Tourism Authority, and members of the ICC.

The crowds of the parade received branded giveaways with information on the destination and tournament, including mini cricket bats signed by Sir Viv, towels, and flyers to leave a lasting impression on the crowds, and ensure mass attendance in November.

“We are delighted to have participated in this exciting event for the Asian-Indian community in North America and raise visibility for our wonderful twin island destination, build meaningful connections, and promote the ICC T20. The Asian-Indian community is an important market for Antigua and Barbuda, particularly as it shares our deep love and appreciation for the wonderful sport of cricket. We are very exciting about hosting this landmark Cricket Women’s World Cup and hope to introduce cricket fans to our wonderful country. With the India Day Parade we provided them a taste of our culture – from our music, to energy and warm personalities, while Sir Viv helped make it an unforgettable experience for fans. We look forward to greeting them once again in November,” said the Honorable Charles ‘Max’ Fernandez, Minister of Tourism and Investment.

Antigua (pronounced An-tee’ga) and Barbuda (Bar-byew’da) is located in the heart of the Caribbean Sea. Voted the World Travel Awards 2015, 2016 and 2017 Caribbean’s Most Romantic Destination, the twin-island paradise offers visitors two uniquely distinct experiences, ideal temperatures year-round, a rich history, vibrant culture, exhilarating excursions, award-winning resorts, mouth-watering cuisine and 365 stunning pink and white-sand beaches – one for every day of the year. The largest of the Leeward Islands, Antigua comprises 108-square miles with rich history and spectacular topography that provides a variety of popular sightseeing opportunities. Nelson’s Dockyard, the only remaining example of a Georgian fort a listed UNESCO World Heritage site, is perhaps the most renowned landmark. Antigua’s tourism events calendar includes the prestigious Antigua Sailing Week, Antigua Classic Yacht Regatta, and the annual Antigua Carnival; known as the Caribbean’s Greatest Summer Festival. Barbuda, Antigua’s smaller sister island, is the ultimate celebrity hideaway. The island lies 27 miles north-east of Antigua and is just a 15-minute plane ride away. Barbuda is known for its untouched 17 mile stretch of pink sand beach and as the home of the largest Frigate Bird Sanctuary in the Western Hemisphere.