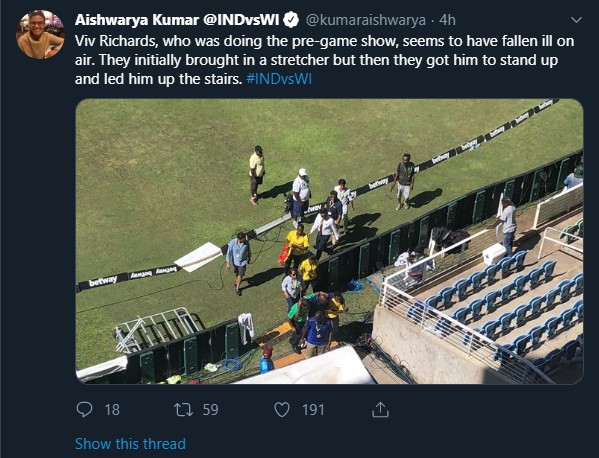 According to multiple reports, the 67-year-old fell ill while he was on air doing a pre-game analysis ahead of the second World Championship Test between India and the West Indies.

Sir Viv, who is part of the commentary panel, was doing a pre-match analysis when he reportedly complained on uneasiness.

While a stretcher was brought, Richards left the ground with the help of two volunteers, according to a tweet by Aishwarya Kumar.

According to media reports, Sir Viv suffered from dehydration due to excessive humid conditions in Jamaica. He was reportedly taken up to the hospital for a precautionary check-up.

News agency, Hindustan Times quoted the former batsman who reportedly returned to the commentary box and said, “To all the fans around the world, I want to say I have recovered. I am OK and I have returned (to do commentary)”.

“No bowler in the world could do it to me, that was done by nature (meaning heat). We have to respect nature”, Sir Viv reportedly added.