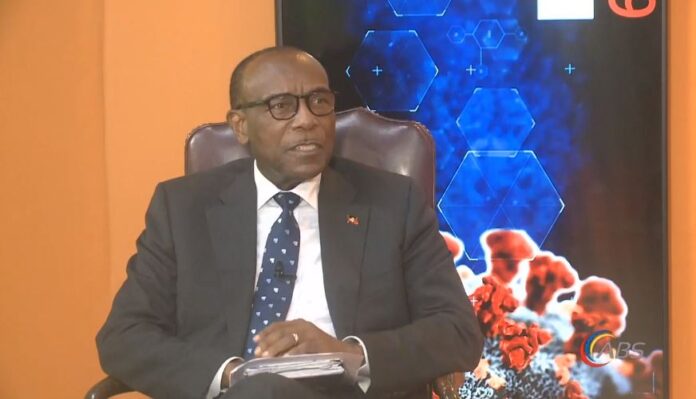 The number of COVID-19 cases recorded since the beginning of the year has almost quadrupled, and the Minister of Health said that lawless residents are to blame.

At the same time, residents have levied their own claims to the effect that tourists have not had to quarantine while returning nationals are mandated to do so.

Many people are of the view that the rules unfairly discriminate against citizens of Antigua and Barbuda.

But Health Minister Sir Molwyn Joseph, while speaking on Observer AM yesterday, said that the evidence has proven otherwise.

“This is an issue that has lingered for too long in light of the evidence that we have. Let me be specific. The problem we are in now has to do with the residents of Antigua and Barbuda and citizens who return to Antigua during the Christmas season and they were quarantined, not isolated. They were asked to quarantine at home. There were over 1,500 of them and hardly anyone stayed home. They were up and about,” Joseph said.

“In terms of the visitors, they are required to restrict their movements and the evidence we have — and it has been the evidence since March through December — there has not been any significant transmission of the disease from the visitors, the tourists who come to Antigua and Barbuda and that’s a fact. We have the data,” he disclosed.

The Health Minister was also asked about complaints from some residents who say they have been left languishing in isolation without hearing from officials, and they have not been able to find out the results of their COVID tests.

“I’ve been hearing more of that question and I have asked my senior officers to investigate that. People in isolation should be hearing from the epidemiology unit and people should be tested and released if they are negative. So, I do not know the accuracy but I appreciate that that could very well be problem, and I’m glad that that is being brought to my attention so I’ll address that issue,” he responded.

Meanwhile, uncertainty over when the country will receive its next batch of vaccines is threatening to stymie the government’s target of inoculating 80,000 adults in 35 days.

To date, Antigua and Barbuda has received 40,000 doses of AstraZeneca from India and 5,000 from Dominica. It has in turn gifted 5,000 doses to Grenada.

So far, thousands of residents have received an initial shot of the jab, but questions linger over when an additional 40,000 doses due to come via the COVAX scheme will arrive due to high global demand.

Joseph told Observer that the government would find out on Monday when those doses – and crucially how many – are likely to come.

AstraZeneca is administered via two doses 12 weeks apart. If not enough are forthcoming from COVAX in time, the national rollout will have to be halted to enable those who have had a first shot get their second dose from current supplies.

Minister Joseph was asked if the COVAX arrangement does not transpire as hoped, if the government will remain on track to meet its target.

He said:” If the vaccine doesn’t come we cannot distribute the vaccine. The target has to be met with the vaccines here in Antigua.” — Observer Media