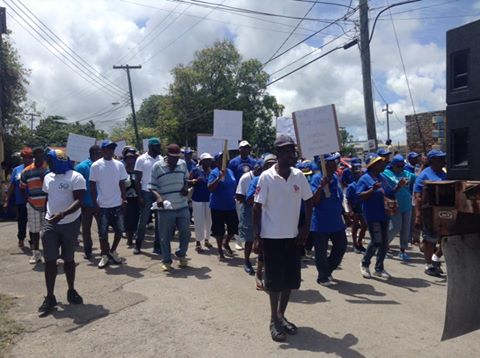 The Antigua & Barbuda Workers Union joined forces with the main opposition United Progressive Party, by promising to reclaim Antigua and Barbuda for the working class.

“We have to send a clear message today that the mission to reclaim Antigua and Barbuda is on,” Hughes told members and supports at the party’s headquarters in St.John’s.

United Progressive Party caretaker Joan Underwood called on workers to use their power to effect change.

“Workers are the life force of any country. So rise up, when you say you want an inquiry..shut the Country down, we have the economic power to bring them to their knees,” she said.

Underwood a former diplomat claimed that youth unemployment is 34 adding “We have fought for too long to now cower before a dictator.”

The two groups then marched through the nation’s capital and will meet later today for entertainment activities.