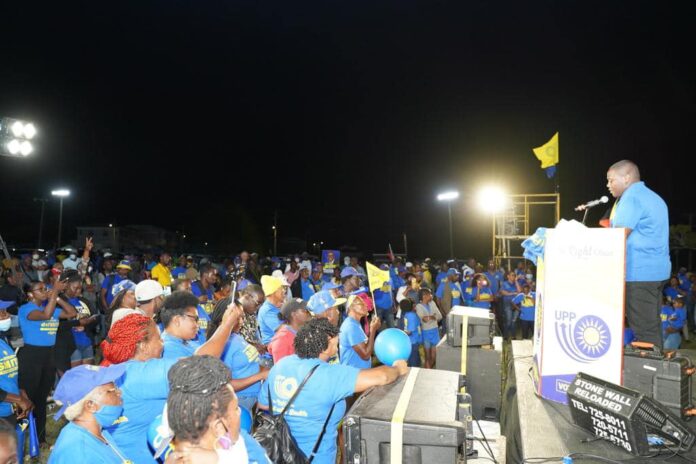 As a youngster, I always find pleasure discussing with the older heads, the political affairs of our beautiful country. From the elders, I learn quite alot and they always appeal to me as persons who can accurately predict the political future.

Interestingly, this time around, I found myself in a heated debate with a former  member of UPP,  who has now switched allegiance to ABLP.

During our conversation, I tried to convince the good gentleman that UPP deserves a second chance in office in order to have themselves redeemed from the flaws they have encountered during their tenure between 2004 & 2014. Ofcourse, the gentleman clearly understood where I was coming from but he failed to accept where I was going with such an argument.

As a result, I quickly  decided to highlight some of the projects that UPP implemented during their tenure  such as, the upgrading of our airport, the construction of Sir Vivian Richards stadium, the construction of the St. Johnston Village stadium, the school meal program, the dollar barrel program, the car park, the drainage in St. John’s,  IMF program, the package offer to teachers, the Canadian mountain police, the ranaming of Boggy peak. Ofcourse I could refer to many more.

With a smile the person sat quietly and listened keenly to what I had to say. Then, with some frankness the gentleman  responded that most of those projects were more like esthetics  & hence did not directly apply to the upgrade of a person’s livelihood.

He then warned me that (1) a burnt child always dreads the fire and (2) it is not everything that glitters is gold. The gentleman then asked me, would a woman really divorce her husband if he is doing well for his family? . Afterwards, he indicated that in politics when ‘100 ‘ is taken away from ‘1000’, the remainder  leaves ‘ 0 ‘ and not 900 as one would have been taught in school . The gentleman also reminded me that in any race, getting out of a block is one thing but finishing the race is another.

As the gentleman saw the baffled look on my face, he began to expound on his parables. He first indicated that presently many UPP members are certainly not satisfied with both Lovell & Pringle as their leaders. The gentleman then mentioned about the excess spending & incomplete projects that UPP encountered, wasting slot of tax payers monies. He then figuratively, equated the ‘ 100 ‘ to the many esteem intellectual members who have vacated the UPP camp, leaving behind a cadre of members who worth zero ” 0 “or value nothing. Bluntly he said that UPP is falling apart & a pure waste of time.

To support his argument, immediately  he made reference to the present slate of candidates that UPP is now showcasing & said the candidates have no proper personal or professional track record  that stands out to earn anyone’s confidence that they can manage the affairs of a country. It is the view of many, that the said candidates will become a national liability rather than becoming an asset to the nation’s development.

Shortly after, the gentleman took me down memory lane and made reference to the state of emergency in 1968, the teacher’s struggle in 1979 and subsequently the incarceration of Sir George H Walter who he think has done very little for the country to earn him the title of national hero. All these events, the person uttered, has created bitterness among the opposition & its supporters and from since then they have been operating primarily on hate, anger, deceit & revenge.

The gentleman emphasized that the opposition has used a strategy of lies to unjustifiably attack VC Bird back then. Afterwards, Lester Bird became their target & now the unwarrated attack is now on Gaston Browne….

I must admit I was surprised of the revelations including a scripture the gentleman quoted which he applied it to the members of UPP …..

Proverbs 6:16-19
“There are six things that the Lord hates, seven that are an abomination to him: haughty eyes, a lying tongue, and hands that shed innocent blood, a heart that devises wicked plans, feet that make haste to run to evil, a false witness who breathes out lies, and one who sows discord among brothers”.

With a smile, the  good gentleman concluded by saying that the electorates need  to focus more on the value of the messages that is brought to the table rather than focusing on the messenger, which in this case is mainly Gaston Browne…

It is evident that the standard of living has improved since 2014. The country is now seeing a middle & upper class lifestyle. Low income earners are now enjoying better housing. Almost every young & old  now have access to their own personal transportation. Our hospital is offering a high level of health care services & even now the masses have access to tertiary or university education.

The good gentleman ended and Empowerment  his certainly the way to go!!