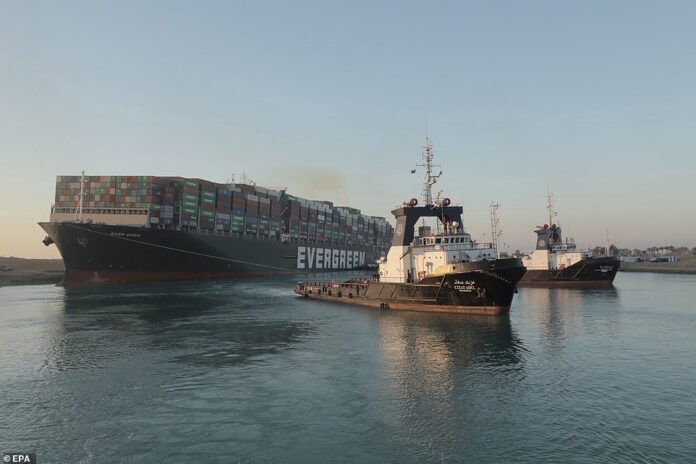 The container ship blocking the Suez Canal was partially refloated this morning but straightening the vessel was ‘the simplest part of the job’ and the bow is still stuck in the canal bank, salvage workers said today.

Tugboats blared their horns to celebrate their breakthrough early on Monday after the 220,000-ton Ever Given was turned ’80 per cent in the right direction’, with its stern no longer blocking the entire channel.

But the head of a Dutch salvage firm hired to extract the ship – and clear a massive traffic jam which has brought billions of dollars’ worth of global trade to a standstill – warned that the toughest challenge was still to come at the front of the ship.

‘Don’t cheer too soon,’ Peter Berdowski told Dutch radio on Monday as goods remained stuck in the canal, adding: ‘The good news is that the stern is free but we saw that as the simplest part of the job’.

It was unclear how long it would take to re-open the canal, six days after the bow of the Ever Given got jammed in the Egyptian shore during high winds – causing £6.5billion of global trade to be held up every day.

Tracking websites showed traffic still backed up at either end of the channel, with the world’s largest container firm, Denmark’s Maersk, warning that ‘it could take six days or more for the complete queue to pass’.

Canal authorities said the ship had been partially refloated after tugboats used a high tide brought on by  a supermoon to pull the 1,300ft-long vessel while rescue teams vacuumed up sand from the canal bank.

Egypt’s president Abdel Fatteh al-Sisi was among those cheering, declaring that ‘Egyptians have succeeded in ending the crisis’ despite the operation’s ‘massive technical complexity.’

Lieutenant-general Osama Rabei said salvage crews would resume their attempts to pull the Panama-flagged ship into the middle of the waterway later on Monday.