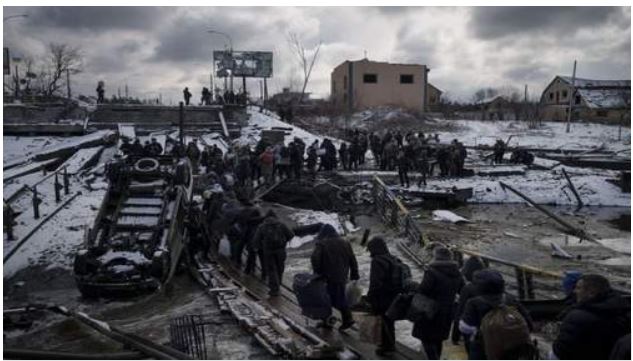 Almost three weeks ago, Russian forces invaded Ukraine, the result of which has been described as a full-on war.

On Thursday, March 10, The University of the West Indies’ Office of the Vice-Chancellor together with The Sir Arthur Lewis Institute for Social and Economic Studies (SALISES) held a Vice-Chancellor’s Forum, examining the current situation and its implications for the global oil industry and the Caribbean.

During his opening remarks of the event themed, “Of Ukraine Oil” Professor Sir Hilary Beckles, Vice-Chancellor of The UWI described the regional university’s position, stating “There remains a challenge within fine universities to accept the principle of militarism as a primary form of public management. We support in general, the notion that diplomacy is not simply intellectualism nor a low valued proposition as we entered the 21st century”.

Speaking pointedly to the impact of the conflict on the Caribbean region he said, “The world will now be called upon to engage and embrace and absorb the significance of an energy crisis and the significance of food security for these nations. They constitute a significant setback for nation-building in the Caribbean. Since we are vulnerable to the volatility of energy supply and prices and we are vulnerable to the volatility in the supply and prices of food.”

Contextualising the main content of the session, Ambassador Bernal described the potential economic global implications, including increases in the price of oil, natural gas, food, shipping, and air travel and the rippling effects on budgets, stock exchanges and foreign exchange markets as well as the social impact expected. He cautioned, “While Russian invasion of Ukraine appears to be a European event like the First and Second World War—which were essentially European—it is going to have global implications, including an increase in global inequities, the developing countries, the poor countries, with less resilience, less capacity for recovery and reorganisation.”

He added however, “It is going to spur a renewed effort to promote the green economy and to reduce reliance on fossil fuels. It will also mean that some of the unused capacity in countries will be utilized for the production of oil and gas. We’ll also see the accelerated development of new resources such as those in Guyana.”

Bashir Badawi, international Oil, Gas and Energy consultant delivered a presentation, illustrating the ramifications of Europe’s dependency on Russian crude and natural gas and the extended impacts for the Caribbean region.

He noted that managing the Energy trilemma – energy security, energy poverty and energy sustainability has become the main priority of governments including our Caribbean island states which are prone to the effects of climate change. Building on the concept, Mr Badawi went on to highlight key considerations for Caribbean nations. These included, among others; national determined contributions according to the Paris Accord; energy transition policies; increasing oil prices; the challenges of alternative energy; long-term geopolitical effects; inflation and the possibility of a global recession.

Looking to the near future, the probable increases in import costs and the knock-on effects for other industries, Mr Badawi said “we are concerned about the inflationary pressure that this is causing and we are looking very closely at the next two quarters to see whether we will have a global recession as we did back in 2008.”

James Stewart focused his comments on the economic implications of the crisis for Jamaica; “not surprisingly the impact of the higher crude prices, the imposition of financial sanctions and a US ban of energy imports from Russia are already being felt in Jamaica” he said. The full magnitude, however, he noted, is largely dependent on the duration and the outcome of the war concluding that “while the situation remains very fluid, it is clear that the shorter the duration the more limited the impact would be, however a victory for Russia can mean that sanctions would remain in place for an extended period, thereby worsening the impact on countries like Jamaica.”

In terms of possible policy responses, Stewart recommends continued development, implementation and fast-tracking of initiatives to reduce the island’s dependence on fossil fuels; increase productivity and mitigate the effects on domestic inflation. He was careful to note that although the size and duration of the conflict remain unknown, some initiatives are already in train to mitigate the impact in the short to medium term.

The forum closed with an engaging Q&A session between the panel and the viewing audience.