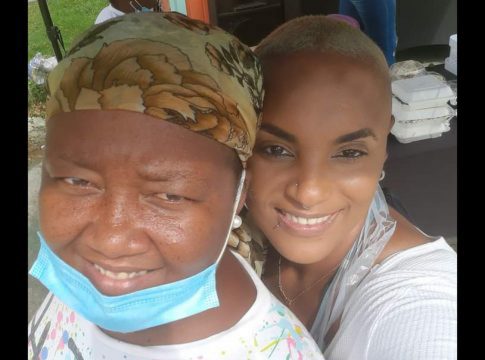 DAILY OBSERVER: Imagine finding out that you are a match as an organ donor to a perfect stranger.

Well, call it a Christmas miracle; one woman will be giving another the perfect gift this season.

After being poked and prodded for about six months, Michele Longford recently found out that she will be able to donate her kidney to Curlethia Ghomes, who she came in contact with after browsing Facebook and spotting an appeal for an urgent kidney donation.

Longford instantly felt the desire to help and these two women connected and formed a bond which will soon grow to another level.

She said that since she received the news last week, “I have not been able to contain my excitement because, honestly, it was a little touch and go for a moment but we made it to the end. I’m so happy to be done with that part but now the hard work begins.”

Twenty-seven-year-old Ghomes said she, on the other hand, was overwhelmed with emotion.

“I was a bit shocked for a while … I was happy. I was crying. I had so much emotion,” she shared.

Ghomes, who has been on dialysis for 10 years, disclosed that the need for a kidney transplant came about a year and a half ago when “my [kidney] abscess got infected, I had to take it out”.

She also referred to other medical challenges and “not getting proper treatment” for them.

Subsequently, having found out that none of her family members proved to be a match, Ghomes reached a roadblock.

She and her family used social media to solicit assistance and Longford became her “knight in shining armour”.

Longford, 42, said that she underwent about 100 tests, the majority of which were done locally at the hospital and in private labs paid for through fundraisers and donations.

“The last set of tests were about three weeks ago; I think that was the most intense of the tests. That was to check and see if I am in fact a match,” she shared.

“They first took 13 phials of blood to send to Ohio for tests and there was an issue with one so I had to take four more,” she explained.

And those 17 phials of blood were taken in just a week and a half.

But despite being “super drained”, Longford said, “I knew it would have been the last set of tests which would have determined the direction we would have to take going forward, so I wasn’t bothered.”

Now, before Ghomes can undergo kidney transplant surgery, Longford explained that she offered to be a part of a kidney exchange programme.

“Currently I am a match for Curlethia and she can have my kidney but I’m not a 100 percent match. So, what they are considering at this point is to put me into something like a kidney exchange programme.

“The chances of her rejecting my kidney obviously will be a little higher just because it’s not 100 percent and we don’t want that. We want to make sure that she has the best possible outcome.

“So, I have always said from the beginning it doesn’t matter who gets the kidney; it’s available for them to do what they need. So, I offered and said yes, I don’t mind being considered for this programme. If there is no better option, they’ll just give her my kidney,” she detailed.

While they await further information, the women are hoping to continue to raise funds for the rest of their miraculous journey.