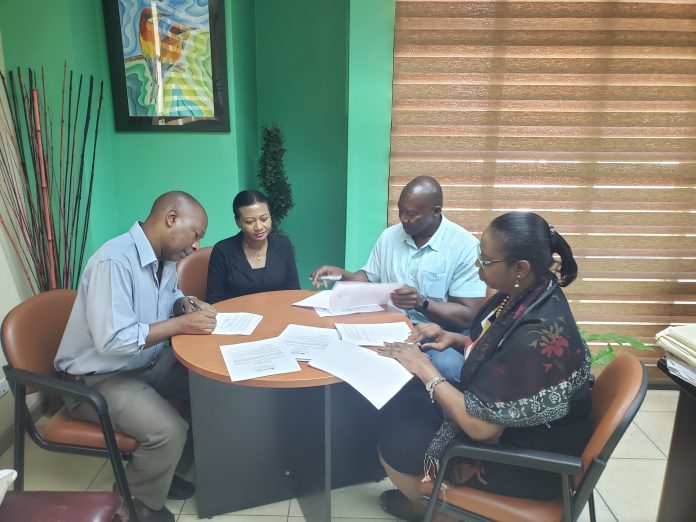 The Caribbean Development Bank has approved two separate loans for expansion work on St. Mary’s Secondary School, under the Basic Education Project 2 Loan Facility and Sir Mc. Chesney George Secondary, under the Reconstruction and Re-Development Loan Facility.
Chad Knight-Alexander spoke in an interview about features of the project, “The two projects feature expansion and upgrade works to two secondary schools: one in Antigua the St Mary Secondary school and the other Sir McChesney George Secondary in Barbuda.”
“The St Mary Secondary school will see the addition of four new building blocks: Block A which is an administration block which will feature the staff room, principal office, secretary’s office, restrooms, a computer lab, and a new kitchen. Block B will see the construction of a two-storey building block which will feature a science block on the lower level, it will also feature restrooms for the students on that level and the upper level will feature two classroom spaces. One for technical drawing and the other for home management. Block C now the third block, that is actually the expansion of the existing building block on-site where three new classrooms were added to the upper level of that particular building block. And block D is simply a security booth added to the front of the school’s property and there is also some remodelling or alteration works to the St Mary Secondary school that will see part of the existing flaw being remodelled to accommodate a guidance counselor office as well as a sick bay.” he explained.
“With respect to the Sir McChesney George Secondary that falls under the rehabilitation and reconstruction loan (RRL) and features four new building blocks as well. First of all there will be a new kitchen and dining space added above the existing cistern.”
“Block B will see the construction of a two-story administration block that will feature a staff room, of course, that will have the principal’s office, secretary’s office as well, restrooms, four classrooms, and a library space This library will be relocated from its current location to that new building block. Block C, on the other hand, will see a separate unit that will feature spaces for home management. So there will be a few food and nutrition labs and home management lab. Block D is the existing science block, however, there will be a remodeling of one of the existing spaces there and in that the existing  food and nutrition lab will be re-purposed to a physics lab. Block E will serve as  a security booth that will be added to the front of the school’s property.”
Knight-Alexander also spoke about the loan and the commencement date of the project.
“Specifically the loan amount for the St. Mary Secondary School that totals to EC 8.8 million dollars and for the Sir McChesney George Secondary EC 9.2 million dollars.” he said.
“Construction is slated to begin on Monday the 28th of November… It is expected to run for a period of twelve months” said Knight.
The construction will be executed by a local construction company, Harrigan Constructions Ltd.