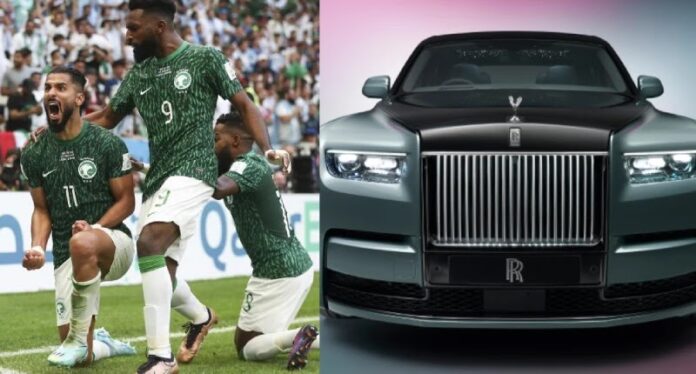 The Green Falcons defeated the South American team with two against one on Tuesday in Qatar.

Prices for the Rolls Royce Phantom in India start from Rs 8.99 crore and go all the way up to Rs 10.48 crore.

The current generation 2023 Rolls Royce Phantom Series II was unveiled globally earlier this year. It is powered by the same 6.75 liter naturally aspirated V12 engine that delivers up to 563 hp and 900 Nm of torque. The engine comes paired with the same ZF six-speed automatic transmission that also does duties in the BMW 760l.

Despite being a heavy luxury car, the RR Phantom is no slouch. It can do 0-60 mph in just 5.5 seconds on its way to a top speed of 150 mph. Keeping in mind the kerb weight of 2745 kg, the Rolls Royce Phantom equips air suspension that helps deliver a magic carpet ride.

Luxury oozes from every corner of the SUV. Right from the exterior to the interior. On the outside, the bonnet is bejewelled by Rolls Royce’s trademark, “Spirit of Ecstasy”, which was recently redesigned to make it more aerodynamic.

The unique coach doors often referred to as “Suicide doors” allows easy entry and exit from the cabin. On top of that, the doors can be easily shut from the inside with just the touch of a button.

The interior very elegantly combines both tradition and modernity. The dashboard is quintessentially Rolls Royce with a unique dashboard including the finest wood veneers, and perfectly weighted metal switch gears.

The signature revolving dashboard panel also hides the infotainment screen, along with two other options of analog watches and just the wood veneers.

In addition, second-row passengers can immerse themselves in lounge-styled seats, with picnic tables, a high-end Lexicon Audio system, and 12-inch monitors for second-row entertainment.

This is just another gesture that the Arab Saudi royalty showed after the historic win. Saudi Arabia’s king even declared a public holiday the next day after the match. After the win, the team now tops the Group C with three points.