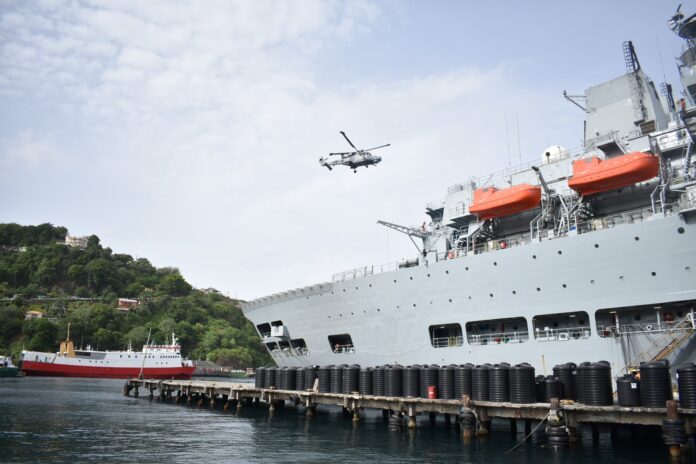 The Royal Navy has delivered 75 tonnes of crucial aid to Commonwealth citizens
whose lives have been thrown into turmoil by a volcano.

The intense volcanic activity has forced the evacuation of the northern half of St
Vincent – the main island of the Commonwealth nation of St Vincent and the
Grenadines – displacing around 14,000 islanders.

The mission to deliver aid to St Vincent has added poignancy for the Royal Navy –
more than 500 people from St Vincent serve under the White Ensign and have been
deeply affected by what has happened in their homeland, prompting various
fundraising and relief efforts on ships and in naval bases in the UK.

“Recent events on St Vincent were a tragedy, but disasters like this are precisely
why we have Royal Navy assets deployed to the Caribbean – to provide vital relief
and assistance to people there when needed in times of crisis.

Our servicemen and women were able to act quickly and decisively when this
request came in, delivering these essential supplies to where they needed to be
within hours.”

The eruptions – the first major volcanic activity on the island in 40 years – dumped a
thick layer of ash over homes and public buildings. Islanders were forced to seek
shelter away from the danger zone in temporary camps, where basic supplies are
now in short supply.

Tanker Wave Knight – which carries a Royal Navy Wildcat helicopter, disaster relief
supplies and thousands of tonnes of fuel – collected an assortment of aid from the
people of Barbados and the World Health Organisation during a lightning stop in
Bridgetown this week.

Sailors and Royal Marines loaded toiletries, sanitary items, cleaning products, tinned
food, bottled water and other essential goods before making the 100-mile journey
west to St Vincent. Just hours later, despite it being well into the night, the aid was
offloaded in Kingstown, the St Vincent capital.

The UK government has already provided £800,000 of funding to meet the essential
needs of the people of St Vincent and provide technical expertise to coordinate the
relief effort since the volcano erupted.

Captain Simon Herbert, RFA Wave Knight’s Commanding Officer, added:
“My ship’s company are keen to demonstrate the UK’s commitment to the security
and stability of the region and to alleviate the humanitarian threat caused by the
volcano crisis on St Vincent.

Among the UK service personnel affected by the disaster was the family of Able
Seaman Rickal Grant, a Royal Navy logistics expert serving with Wave Knight.”
Able Seaman Grant said:

“I have children that have been displaced by the eruption. The people displaced,
including my family, will benefit from this humanitarian aid given by the people of
Barbados. I am happy to be a part of the ship’s company delivering this aid.”
Wave Knight left Scotland a fortnight ago to join the Royal Navy’s permanent
presence in the Caribbean and North Atlantic, patrol ship HMS Medway.

Individually and together, the pair provide support and reassurance to Britain’s
Overseas Territories in the region, as well as Commonwealth states. They are on
hand to deliver aid in the event of natural disasters – the Atlantic hurricane season
has just begun – and work with local authorities and allies to prevent drug trafficking
between South and North America.