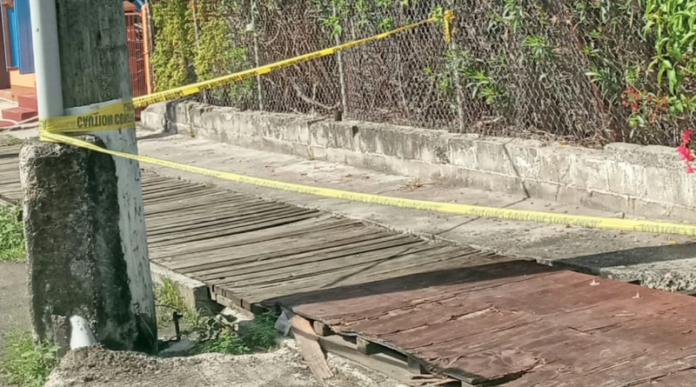 Members of the public and Alister Thomas, the United Progressive Party’s Candidate for St. John’s City West, are expressing concern about the boardwalk between Redcliffe and Heritage Quays.

The structure is in a dilapidated state, with one area completely rotted and falling apart.

This has prompted officials to erect a “Do Not Cross” yellow tape around it, preventing persons from walking there and being injured.

One resident says the Gaston Browne Administration needs to address this dangerous situation urgently, since it is located about 200 yards from the Heritage Quay cruise pier and is in the heart of the shopping area.

She says the Ministry of Tourism should be ashamed of itself for leaving the walkway to deteriorate to such an extent – especially now, when Antigua and Barbuda is forecast to have an active tourist season.

According to her, this is not a look that tourists expect to see in the middle of the downtown shopping district, immediately after disembarking the ship.

The woman says placing a Band-Aid on the situation – by putting yellow tape around it – is not sufficient or proper.

She claims that the Browne Administration has collected no less than $13 billion and apparently has squandered all of it, since the infrastructure in St. John’s is poor and rundown.

While officials boast about our tourism product, she says, there is truly nothing to brag about when looking around the city.

In November last year (2021), the Cabinet announced that work to replace the boardwalk in the Redcliffe Quay area would commence.

The structure had been deemed unsafe by the Development Control Authority (DCA) and it was noted that replacement of the bridge would cost more than $200,000 if done by a private contractor.

That amount required that tendering be undertaken.

However, Information Minister Melford Nicholas said it was possible to speed up the process by seeking a waiver from the Tenders Board, and that would be done.

It has been over a year and the condition of the boardwalk has worsened and the promised work has not taken place.

The government had promised that traveling from the cruise vessels on foot would be addressed in such a way that visitors do not put themselves in danger.