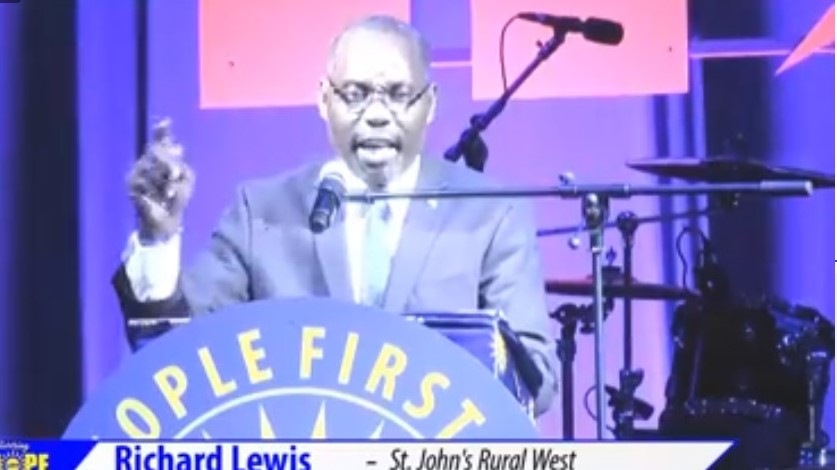 In a letter to “only members” of the United Progressive Party, leadership hopeful Richard Lewis is denying that he wants to hurt the party.

Lewis has made his intention known to contest the leadership of the United Progressive Party, a task he says he was asked to do by Harold Lovell, the now leader.

In his letter Lewis also reveals that there are members and non-members of the UPP who are plotting against him.

The full letter by Lewis is below.

“By now you’re most likely aware that I – Richard Sylvester Lewis – have decided to vie for the Political Leadership of the United Progressive Party. I look forward to sharing my vision for a victorious future with you; due to situations beyond my control, I am forced to first address you on a very important matter. I wish to set the record straight and make it absolutely clear how I arrived at my candidacy for Political Leader.

Bro. Harold Lovell told me he was done with elective politics and ask me if I would lead the UPP.

In a subsequent conversation, he even suggested who I could consult as my deputy.

I consulted that person and thereafter, began my work to build support.  I was deeply honored by Bro.

Harold’s request especially since I deemed it was made after sober meditation on his part.

I wrote the sixteen (16) Constituency Branches of the UPP, officially informing them of my bid for the Political Leader position. To my surprise, Bro. Harold changed his mind and decided to run, but didn’t see it fit to even inform me. Instead, I received several calls from individuals suggesting that I back down. Please understand me – I strongly defend Bro. Harold’s right to change his mind.

It is definitely his right to change his mind twice, three times, however many times it takes him to arrive at a final position.  It is also my right not to change my mind about vying for the Political Leader position.

After praying about it, and talking to my family and the support base that I had already built, I decided to forge ahead as I strongly believe that the UPP needs renewal and I believe that I have the necessary strengths to meet the challenges currently by the UPP.

To my astonishment, I began to hear talk that I was “mashing up the party”.  I have neither done nor said anything inimical to the interest of our Party, the UPP.

I have kept my campaign internal.  When the media calls me, I decline making comments, all in the interest of maintaining Party unity.  When posts were popping up on Social Media, I quickly put out a statement disassociating myself and indicating that I have a sole FaceBook presence.

I am not associated with any other and I cannot control Social Media. What I am seeing here is that the people who are the true root-cause of the division are the people who have been meeting regularly for over six (6) months at Tradewinds Hotel.  That group comprises members of the UPP, non-members of the UPP and member(s) of the DNA.

I know all the names but that is for another time.  They say that they meet with the blessings of some in the leadership of the Party (and I believe them) and at least one in leadership attends regularly.

Their mandate is to put a new slate of candidates together to present to the leadership.

They have already targeted me, Bro. Marshall and some others who performed creditably in the last General Elections.
Fact: They went into the St. Mary’s South Constituency and began the process of recruiting a replacement for Bro. Marshall.
Fact: They have the replacement candidate for the St. John’s Rural West Constituency.  This individual is the appointed Chairman of the Tradewinds meetings.

A message was sent to me from a that if I do not back down, they will “done me” – whatever that means.
This group even set up a meeting for some in the top leadership of the Party to meet with Bro. Arif Jonas to convince him to step aside from his intention to vie for the candidacy in the All Saints West Constituency to facilitate the Political Leader’s bid to run there.

Fact:  That meeting happened and I know all those who attended – a collaboration between the and some in the top leadership of the Party.

It is sad that this is happening. I raised this issue at our Central Executive meeting of November 21, and no one refuted what I said.  I called for an end to the Tradewinds meetings in the interest of Party unity. Sadly, the meetings continue.

At the meeting held at Freedom Hall last night (December 05, 2018), my presentation was about the interest of the UPP – nothing about the leadership race. That was not the place for that especially since the meeting was carried live for the world to hear.  Some speakers used the opportunity to campaign and to give the impression that I am dividing the UPP. One speaker at last night’s meeting, who is a regular attendee at the Tradewinds meetings, hypocritically blasted others for dividing the Party when he is at the of causing the division.

I agree with him though that we should “Judge people by what they do, not what they say”. I am saying that we must put an end to the divisive Tradewinds meetings and am seeking the support of the membership of the UPP to join me in this call. The UPP is bigger than all of us.  We will go to the convention and the delegates will decide. I look forward to sharing my concerns and plans future messages to you. I earnestly believe that to achieve our goals we must be the ‘Party That Listens’.”