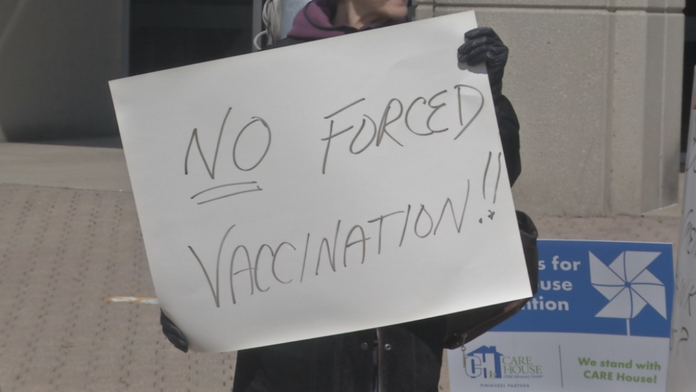 The Covid-19 pandemic which has placed a stranglehold on countries all over the world from the beginning of the year 2020, following the outbreak of the mystery illness alledgedly emanating out of Wuhan, China in late 2019, has engendered the implementation of all sorts of regulations and protocols in an effort to combat the pandemic.

While Antigua and Barbuda, and indeed the world, has become accustomed to the Covid-19 protocols such as the wearing of mask, social distancing and hand washing, countries are now mulling the proposal of introducing mandatory vaccination as a further methodology to fight the covid-19 pandemic.

The thinking of course underlying the need for mandatory vaccination is that by implementing such a policy, the critical number of the population being vaccinated would be attained. This is premised on the assumption that if about 70% of the population is vaccinated the existence of Herd Immunity would materialize and thus the likelihood of transmission of the disease to others would be considerably reduced, since the probability of infected and non-infected persons coming into contact with each other would lessen.

The burning issue that pervades the topic of mandatory vaccination is whether it would be lawful for the government to embark on that course of action. More importantly, the fundamental question is whether such an action would be consistent with the Constitution.

Now, as we are all aware the Constitution is the supreme law of Antigua and Barbuda. The question to be answered, therefore, is whether the Constitution makes allowance for the imposition of mandatory vaccination by the government.

Mandatory vaccination as the term itself implies, involves an encroachment on the personal liberty and integrity of the person without consent. While section  5 of the Constitution speaks to the “protection of the right to personal liberty”, it also outlines certain cases where derogations from that right would be permissible. One such case would be “for the purpose of preventing the spread of an infectious or contagious disease” as is stipulated in section 5 (1) (h). More importantly, section 16 of the Constitution clearly gives Parliament the power to make laws during an emergency which derogate from  citizens normal fundamental rights and freedoms.

The government has already declared by Statutory Instrument No. 15 of 2020 that covid-19 is a dangerous infectious disease. The next step that would be required to facilitate the imposition of mandatory vaccination is the enactment of legislation to authorize it. The enactment of such legislation would not be inconsistent with the Constitution since the Constitution would have sanctioned the derogation from the fundamental protection of the right to personal liberty. Yes, the validity of such legislation could be challenged in the Courts, but that would be a futile exercise since it would be difficult, if not impossible, to establish the unconstitutionality of the legislation.

It would be useful at this stage to place mandatory vaccination within an international context  and assess the case law with respect to it. Three of the most significant cases regarding mandatory vaccination are Jacobson v. Massachusetts(1905), Solomakhin v. Ukraine (2012) and Vavricka and Others v. Czech Republic (2021). In the Jacobson case the United States Supreme Court upheld the authority of States (in this case Massachusetts) to enforce compulsory vaccination laws. The Court also noted that individual liberty is not absolute and is subject to the power of the State. This case has been used as a precedent in justifying facemasks and stay-at-home orders by governments. In the Solomakhincase, the European Court of Human Rights, while holding that mandatory vaccination interferes with a person’s right to integrity protected under article 8 of the European Convention on Human Rights (ECHR), concluded that such interference may be justified if considered a ‘necessity to control the spreading of infectious diseases’. The latter reasoning of course being quite similar to section 5 (1) (h) of our Constitution. In the more recent Vavricka case, dealing with childhood vaccination, the European Court on Human Rights in a vote of 16 to 1 held that the mandatory vaccination of children was compatible with the ECHR.

While these case laws would be persuasive and not binding on our judiciary, Antigua and Barbuda is a signatory to the Universal Declaration of Human Rights and the International Convention of Civil and Political Rights (ICCPR). On being a signatory to these International Agreements, Antigua and Barbuda would be bound by the Articles of the Agreements.

Article 7 of the ICCPR states that “No one shall be subjected to torture or to cruel, inhuman or degrading treatment or punishment. In particular, no one shall be subjected without his free consent to medical or scientific experimentation”. It is the latter sentence that is germane to the discussion and is the basis for the contenton that mandatory vaccination is a breach of the ICCPR  according to the Pastor and Attorney.

Article 4.1 of the ICCPR notes the proviso that “In time of public emergency which threatens the life of the nation and the existence of which is officially proclaimed, the States Parties to the present Covenant may take measures derogating from their obligations under the present Covenant to the extent strictly required by the exigencies of the situation, provided that such measures are not inconsistent with their other obligations under international law and do not involve discrimination solely on the ground of race, colour, sex, language, religion or social origin”.

However, article 4.2 of the ICCPR makes the declaration that “No derogation from articles 6, 7, 8 (paragraphs I and 2), 11, 15, 16 and 18 may be made under this provision”. It is the non-derogability of article 7 that the Pastor and Attorney are relying on to support their contention that mandatory vaccination would be a breach of the ICCPR.

Now, here is where my position is diametrically opposed to that of the Pastor and Attorney. I do not subscribe to the view that mandatory vaccination is a breach of article 7 of the ICCPR. The question that one has to answer at this juncture, is whether implementing a mandatory vaccination process is tantamount to medical or scientific experimentation.

To be clear, what article 7 objects to is the subjection of a person to medical or scientific experimentation without their consent.

What is medical experimentation? The Encyclopedia of Genocide and Crimes Against Humanity defines medical experimentation as “the testing and evaluation of a new drug or procedure on a human person in order to gain generalizable knowledge that can be used for various purposes”. In the case of the development of the covid-19 vaccines what was the process? The covid-19 vaccines started with laboratory research, which was followed by animal studies and then human clinical trials. These human clinical trials are conducted in three phases and must provide scientific evidence to demonstrate that the benefits of the vaccine far outweigh any risks. In phase 1 the clinical trials involved a few dozen people to determine if the vaccine is safe, the best dosage and possible side effects. In phase 2 a few hundred people were involved again to determine how well the vaccine works and also its safety and side effects. Phase 3 involved a larger study comprising of thousands of people who were given the vaccine as against a “control” group given a placebo. Again, the data is analyzed to determine the safety and effectiveness of the vaccine in a larger population.

Now, this is the process that can be described as medical and scientific experimentation and in this process of trials the consent of all the volunteers would have been obtained. Once the evidence shows that the vaccine is safe, effective and does very little harm it is then approved for production and general public use.

To say, therefore, that some one taking the vaccine today, without their consent, is being subjected to medical and scientific experimentation, would be a quantum leap from the methodology and modalities of  medical and scientific research. On that basis, I would posit that no Court faced with that question would conclude that taking the vaccine today is a breach of section 7 of the ICCPR.

Finally, while I have submitted that mandatory vaccination would not be unconstitutional, it is my view that mass public education and moral suasion should be employed to convince people to take the vaccine, rather than embarking on a mandatory policy.