Refurbishment work has apparently commenced on the Five Islands educational facility for use as a university campus.

Chief of Staff Lionel “Max” Hurst, when contacted by Antigua News Room (ANR), could not confirm or deny that work had in fact commenced.

But ANR received photos showing some sort of activity at the location.

He said, however, that some work would have to be done in one of the buildings where the School of Nursing would be housed.

According to Hurst, there is a requirement that space has to be created in the department of nursing resembling an emergency room (ER). 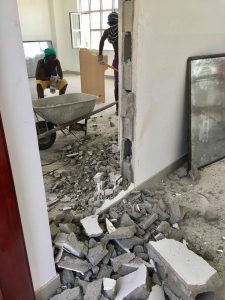 Underwood said the Five Islands campus, a gift from the People’s Republic of China, was purpose-built for a secondary school.

She said the government should not attempt to convert it into a university, but use it for the purpose it was built-to alleviate overcrowding in some secondary schools.

Underwood said the government is now pushing to finish a new secondary school, which will only be able to accommodate first form students.

“In the meanwhile, students will be returning to crowded classrooms and attending classes under trees and tents in some instances. Also, the government hustled through to build another secondary school in Tomlinsons.

“The PM recently travelled to Morocco to seek financial assistance to finish that new school so that it can open in September. Construction has been taking place around the clock,” Underwood added.

Construction of the school in Five Islands commenced under the Baldwin Spencer administration but was completed by the Gaston Browne government last year.