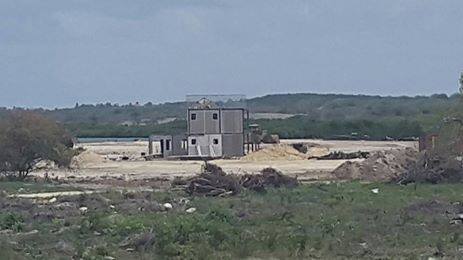 Buildings are going up on land owned by Chinese company YIDA and residents are furious over possible degradation of the environment and breaches to planning laws.

“Yida, no planning permission, Mangroves in far ground cut down, buildings going up,” said Robert Hill who posed on the Facebook of the Environmental Awareness Group.

“We have given up sovereignty of part of our country to a foreign private corporation,” he added.

Cabinet announced on Thursday that two officials from the Department of the Environment (DoE), and YIDA’s General Manager for the Guiana Island project, came to Cabinet to discuss the plans for the further construction of two hotels on the 1600-acre site.

“The Cabinet agreed that the YIDA project is proceeding with containers landing each week. Although vegetation has been cleared, the plan is to construct model homes on the cleared area,” said government spokesman Lionel Max Hurst.

But he said the construction of the hotels requires further collaboration with the DoE and the DCA.

Hurst said “the Cabinet examined aerial shots of the site and the areas where the buildings will be placed. Cabinet is satisfied that the project is moving forward.”

Despite the assurance from the government, some residents are pessimistic, writing on Facebook, “politicians don’t give a care about ecology, the environment or their people.”