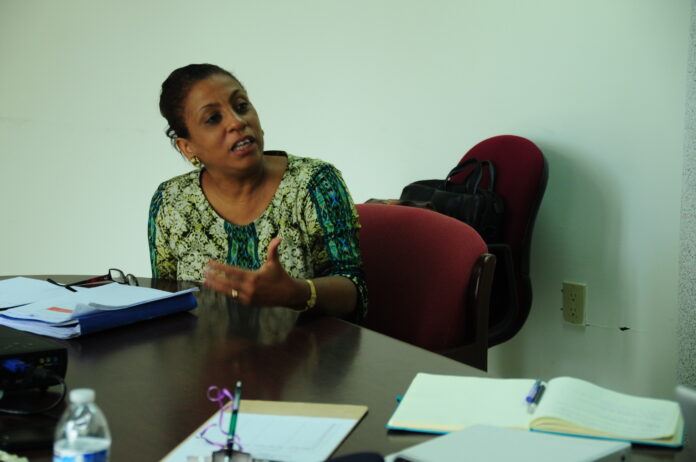 Regarding the awareness of child rights and the prevention of child abuse, “ what are three main areas of reform that you would recommend to the Government of Antigua and Barbuda?”

This was the question – and challenge – posed by a regional independent consultant and advocate for child justice, Dr. Jacqueline Sealey-Burke, to child rights advocates and stakeholders at a recent networking/training workshop event organized by Decides Antigua and Barbuda (Decides AB), implemented by Interarts in association with Women Against Rape (WAR). The two-day workshop was held at Antigua and Barbuda’s Department of Environment.

Emphasizing the need to prioritize, Dr. Burke advised her audience that the government at this time would be forced to prioritize and that it was important for stakeholders to reflect on their own list of priorities.   One area that urgently needs to be addressed she said is the regular dissemination of information to the public concerning the laws, policies, structures and services that relate to child rights awareness, child justice and the prevention of child abuse.

“This is low-hanging fruit,” she added, noting that despite the passage in recent years of social legislation by the Antigua and Barbuda parliament designed to champion child rights and justice and to prevent child abuse, two main weaknesses still exist, the dissemination of information and secondly, the tardiness in implementing the provisions of the various legislative acts, among them the Child Care and Protection, Child Justice and Status of Children Acts.

Indeed, Dr. Sealey-Burke also asked her audience to identify the main gaps in implementation, and then in obvious reference to the United Nations Convention of the Rights of the Child (UNCRC), an international treaty ratified by the government of Antigua and Barbuda, she asked, “ Has Antigua and Barbuda lived up to its international obligations regarding the rights of the child and child abuse prevention?”

The two-day networking and training seminar brought together child rights advocates and stakeholders, onsite and virtually.  Focusing on Child Rights and the Prevention of Child Abuse, the objective of the event was to raise awareness of child rights and enhance the capacity of civil society organizations to prevent and respond to child abuse in Antigua and Barbuda.

Although pointing out the tardiness in distributing vital information to the public, as well as the implementation gaps and the inefficient collection of raw data, Dr. Burke nevertheless applauded the governments of the region, particularly those of the OECS, who with the assistance of the United Nations Children’s Fund (UNICEF), have updated their social legislation regarding child rights and child protection policy.

She also noted that most regional countries have ratified the UN Convention of the Rights of the Child (UNCRC), though most have not yet signed on to two additional and optional protocols, the first of which seeks to ensure that children under the age of 18 are not recruited into the armed forces of their countries. The second calls on states to prohibit child prostitution, child pornography, and the sale of children into slavery.

In facilitating one of the workshop sessions, Dr Sealy-Burke issued a further challenge to the seminar participants. She told them while national governments are obligated to submit regular reports to a United Nations committee on the implementation of the UNCRC, the said Committee also welcomes Shadow Reports from Non-Governmental Organizations. She revealed that the Shadow Reports are useful for providing an additional perspective to that offered by the Government.

The UNCRC is the only international human rights treaty to give non-governmental organisations (NGOs) a direct role in overseeing its implementation under CRC Article 45 A.

Dr. Sealey-Burke also offered her take on corporal punishment and foster care. On the former, she underscored the importance of abolishing corporal punishment and commented on the leadership role that the State should play in this regard by first prohibiting flogging or any form of corporal punishment through State-run institutions like the school or the justice system. Regarding foster care, she mentioned that many foster parents in the region do not have much money and recommended the increase of stipends and other incentives to foster parents. Asserting that foster care must have standards and foster children should not be resigned to a constant state of poverty, she, however, warned against the over-commercialization of the foster-care system which could result in foster parents paying more attention to incentives than foster care.

Other notable presentations were made by social psychologist, Dr. Cleo Athill who spoke on the ‘Psychological Effects of Adverse Childhood Experiences (ACEs),’  adverse effects that can last well into adulthood.  Dr. Nicola Bird,       Executive Director of Integrated Health Outreach (IHO), implementing agency of the ‘Pathways to Addressing Child Abuse and Child Rights in Antigua and Barbuda’ project, also funded by Interarts, gave an overview of IHO’s communications, public awareness and education campaign, on behalf of Decides Antigua and Barbuda. The latter is an ongoing project that has so far included a virtual press conference, television and radio interviews, virtual meetings with child rights stakeholders, social media outreach, and training workshops with the support of the Ministry of Education.

Another key intervention was made by Ms. Feona Charles-Richards, Director of Family and Social Services Division, Ministry of Social Transformation, Antigua and Barbuda who addressed ‘The situation of Child Services and Child Rights in Antigua & Barbuda, special focus on Prevention of Child Abuse.’

During her presentation, Ms Charles-Richards alluded to her Ministry’s current communications and public awareness outreach regarding child rights and prevention of child abuse, a project in association with UNICEF.

By highlighting parallel communication and public awareness campaigns both Dr. Nicola Bird and Mrs. Charles-Richards to some extent addressed the concerns raised by Dr. Sealey-Burke concerning the spreading of information on child rights awareness and child abuse prevention in Antigua and Barbuda.  They both referred to the issue of under-reporting in Antigua and Barbuda and stressed the need for residents to become familiar with the signs of child abuse. They emphasised that those who hear of or see child abuse should report it to the appropriate agencies.

Reports can also be made to counsellors based at the country’s secondary and primary schools.

The chairperson of the networking/training workshop was Ms Alexandrina Wong of Decides Antigua and Barbuda and the Executive Director of Women Against Rape.

The workshop meeting was the second networking event organised by Decides AB, the first one having addressed the protection of the human rights of LBGT persons in Antigua and Barbuda.