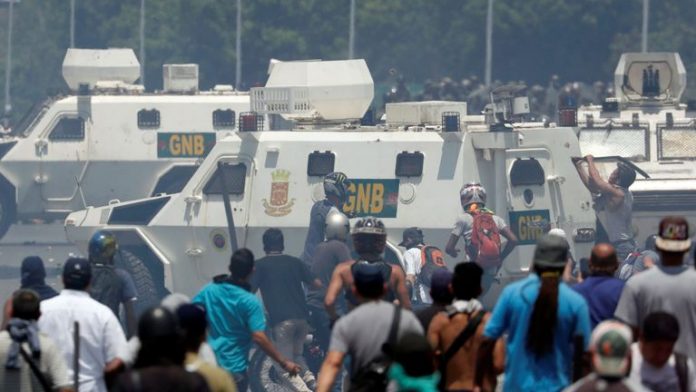 The 15-member Caribbean Community (CARICOM) Tuesday appealed for “calm and peace” in Venezuela where Opposition Leader Juan Guaidó has embarked upon what he called the final phase of the plan to oust President Nicolas Maduro from office.

CARICOM Chairman and St. Kitts-Nevis Prime Minister Dr. Timothy Harris in a statement, said that the region had been apprised of the situation in Venezuela, which appears to be nearing a boiling point.

Harris, who said he had also been in contact with other CARICOM leaders and the CARICOM Secretary General, Irwin LaRocque on the unfolding situation in Caracas.

“I appeal for calm and peace,” Harris said, while reiterating his pledge that CARICOM will continue to make every effort to help bring a peaceful resolution to Venezuela’s political crisis.

“My colleague Heads of Government and I are collectively charged with ensuring the continued security and stability of our beloved Caribbean region,” Prime Minister Harris said, noting “this responsibility is our first and foremost priority as we work in unison to safeguard our people’s future.

“CARICOM has been working earnestly to promote meaningful dialogue and diplomacy, as well as a four-phased process called the Montevideo Mechanism whose aim is an inclusive and lasting solution.  Such a considered approach can only redound to the benefit of the country and people of Venezuela and, by extension, the countries and citizens of Latin America and the Caribbean,” he said.

Harris is scheduled to visit Costa Rica next week for follow up discussions with the International Contact Group (ICG) on Venezuela.

Earlier, Trinidad and Tobago had issued a separate statement reaffirming “its principled position of non-intervention” in the internal affairs of Venezuela.

”It has been reported that  certain elements of the Venezuelan military have indicated support for Mr. Juan Guaidó and that support has resulted in disturbances in Venezuela,” the Ministry of National Security said in a statement.

It said that Trinidad and Tobago “maintains the principled position of non-interference and non-intervention in the internal affairs of Venezuela and hope that the Venezuelan people will resolve their affairs peacefully”.

Guaidó, appeared in a video with uniformed men, saying he had military support and called for more members of the military to help him end President Maduro’s “usurpation” of power.

The Opposition Leader, who has declared himself interim leader of Venezuela, has the backing of the United States and most Western countries, while Maduro, who was sworn into office for a second consecutive term in January, has the support of Russia, China and Cuba.

A number of Venezuelans have fled to Trinidad and Tobago to escape the situation in their homeland and in the statement, National Security Minister Stuart Young said he had was advising the country that the relevant divisions of the Ministry of National Security “have been working together and have been focused on securing our borders and we will continue to do so”.