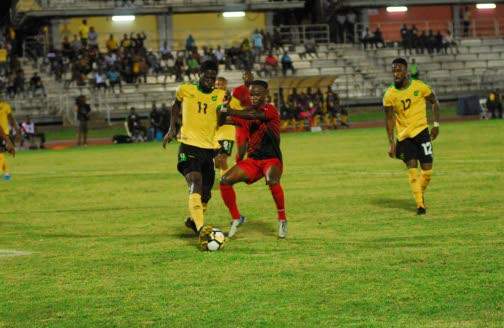 Shamar Nicholson scored a brace as Jamaica opened their Concacaf Nations League Group B schedule with a 6-0 mauling of minnows Antigua and Barbuda at Montego Bay Sports Complex last night.

England-based debutant Bobby Reid, Germany-based Leon Bailey, and Albanian-based Brian Brown all scored their first goals for Jamaica in the route, while Peter Lee Vassell put the icing on the cake as the host nation raced to the top of Group B on goal difference after Guyana edged Aruba 1-0 in the other game. Both teams are on three points and will meet next Tuesday in Guyana.

It was a walk in the park for the Theodore Whitmore-coached team, as the visitors were over matched and gave up four goals in the second half.

Nicholson opened the scoring in the 11th minute when he beat Antiguan goalkeeper Molvin James from close range, and Reid added the second from a sublime pass from Bailey in the 32nd minute.

Nicholson made it 3-0 when he headed home from close range in the 51st minute. Brown, who replaced Junior Flemmings, scored in the 67th minute, followed 10 minutes later by Bailey, while second-half substitute Vassell made it 6-0 in the 81st minute.