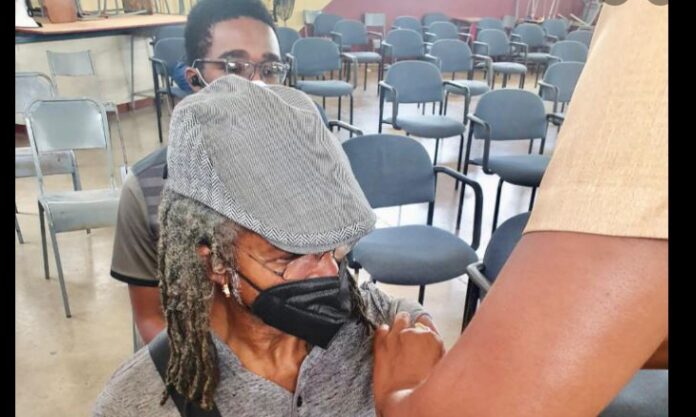 Three Rastafarians were among hundreds of Jamaicans who turned up at the Turtle River Park vaccination site in this resort town yesterday, giving an indication that not all members of the faith share its traditional opposition to the inoculation process.

“If people waan bun mi out a fi dem fire dat,” said a determined Noah Green, his locks wrapped neatly atop his head as he sought refuge from the sun beneath a metal staircase.

Many Rastafarians have been particularly vocal in their opposition to the COVID-19 shot, but Green said his decision to get the jab was an easy one to make.

“As long as it is a resistance against COVID-19, mi inna it… Mi naah wait till COVID ketch mi [then] mi run go hospital fi resistance,” he commented. “The anti-vaccine people, mi nuh care ’bout dem.”

Green, who was there for his second shot, added that he chose Pfizer because it is also the one recommended for children 12 years and older. “Anything weh pickney fi get, mi inna it because pickney get the best things… Mi feel normal; it come like mi even stronger [after taking the first dose],” he said.

Another Rastafarian, Denton Stewart, told the Jamaica Observer that he took the vaccine because he is a craft vendor and wants to capitalise on the money-making opportunities in the tourism industry, which is pushing for Jamaicans working in the sector to become vaccinated.

“Mi nuh have nothing else fi do [professionally]… If mi nuh tek the vaccine, mi a go tun duppy an mi nuh want tun.

Asked if he would encourage other Rastafarians to get vaccinated, he said: “Dem haffi decide fi demself. Maybe if mi tell dem fi tek it dem cuss mi.”

Spencer Roach, better known as “Mega Star”, a Rastafarian for several years, was there for his second dose of Pfizer.

“Mi jus’ wake up one morning and seh mi a go tek it,” he shared, noting that he works as a tour operator in the tourism industry.

Roach said he is not concerned about people who may accuse him of not being true to Rastafari traditions.

“To each his own; it is a personal decision,” he reasoned. “Vaccine suppose to help yuh; mi born come see vaccine.”

Among the large crowd who showed up to be vaccinated was Leroy Shaw, who fled the zone of indecision after COVID-19 killed one of his close friends this week.

“I think it is best to take a chance with the vaccine than with death,” he told the Observer, adding that he picked the Johnson & Johnson vaccine because it is a single-dose, unlike the others that require two jabs.

Another man at the vaccination site, who gave his name only as Barrington, said he had already took his first dose of vaccine.

He is of the view that many more people will start following suit.

“It is a system wi have to work with,” Barrington postulated. “No matter how yuh try go around it (being vaccinated), yuh can’t go around it. Wi haffi jus try work with it.”

Nadine Seaton, a teacher who was at the vaccination site with her husband and son, explained that it was a family decision that brought them there.

“A lot of people are dying from COVID and every day there is a new strain [of the virus]. We have to do what we have to do to protect ourselves,” the educator said.

She also noted that the impending resumption of face-to-face classes factored in her decision to become vaccinated.

That view was shared by a number of students who showed up for the jab.

“It wasn’t an easy decision to take the vaccine, but I have to take it to go back to school,” said Serena Walters, a 10th grader at St Mary High School.

So determined were they to get their jab, most of the crowd stood for hours in the scorching sun.