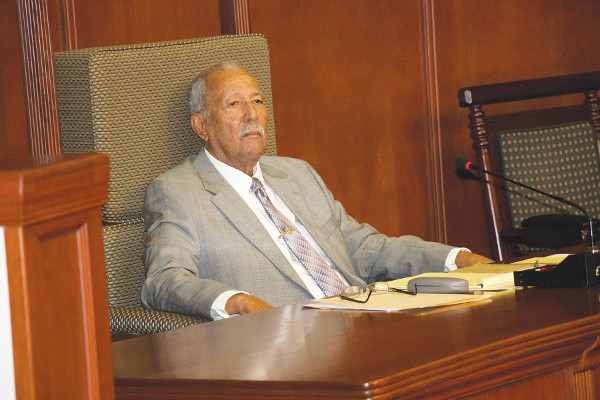 Prominent Attorney Sir Gerald Watt QC has taken strong objection to a decision by a high court judge to grant an injunction halting construction of the international airport on Barbuda.

“It was a terrible decision,” Sir Gerald told listeners to Pointe FM yesterday.

He said “the judge at first instance should have allowed certain things to be heard.”

The senior lawyer whose law firm dealt with the injunction on behalf of the government said, the judge refused to hear lawyers appearing for the Development Control Authority because he did not file an affidavit.

“You know I don’t like to criticize the court but as a leading Queen’s Counsel in this country, I have to say it as I see it: It’s a bad decision.”

The senior lawyer revealed that the appeal was filed weeks ago and the judge has decided to hear it as a matter of priority.

“I don’t know what the reasoning was and so on but not to allow counsel, who comes here and say I appear for the DCA..for a judge to say I am not hearing you because you have not filed an affidavit.. seriously.”

“And you are going to give an injunction to stop a public project like an airport that is 60 finished or whatever.”

“This is madness you know,” Sir Gerald added.

On August 2, High Court judge, Rosalyn E. Wilkinson, instructed that all construction on the international airport in Barbuda be stopped immediately.

The ruling was in favour of John Mussington and Jacklyn Frank, who are acting on behalf of Barbudans affected by and opposed to what they say is the massive destruction of forests, wildlife and ecosystems, allegedly, from the construction of the airport.

Meantime, Prime Minister Gaston Browne wants those who bring frivolous matters before the courts to be sued.

“The time has come for us to challenge some of these individuals with their frivolous lawsuits.”

“Especially if we have to pay the contractor any penalty on this project. I am of the view that on the basis it can be done legally we should counter sue,” he said.