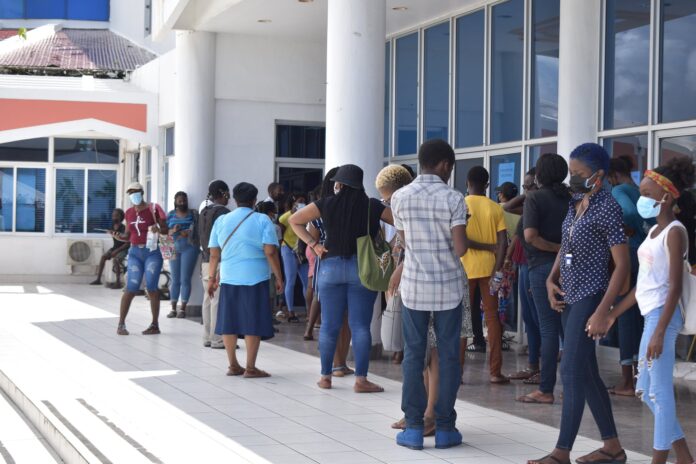 The Browne-led administration on Thursday 16 September 2021 announced that
all unvaccinated government employees to include the Public Service, statutory
corporations and companies in which the government owns majority shares shall be
required to remain at home until proof of vaccination is provided. The new COVID19 Vaccine mandate takes effect from the 1st October, 2021.

However, the Antigua and Barbuda Public Service Association (ABPSA) in its letter
to PM Browne has indicated that the mandate has raised a number of unpleasant
issues for its members as they try to deal with the new policy.

President of the ABPSA, Joan Peters explained that whilst the union understood the
government’s goals to reduce the spread of the COVID-19 virus and increase
vaccination rates, “we had expected to be given the opportunity to be part of the
discussions to ensure full participation and compliance of our members and offer
workable solutions like weekly testing, as part of the island-wide efforts.

Mrs. Peters has highlighted a number of questions from her members who are
seeking immediate clarification from the Government:

1. Despite the widespread commotion of the vaccine, we have not heard anything
about the potential side effects of the various vaccines available in Antigua and
Barbuda. Can you confirm what are the known side effects (serious or otherwise)
of the vaccines provided by the government of Antigun and Barbuda?

2. During promotion of the vaccines, we often hear the term “underlying issues
Please provide us with a list of these underlying issues that would afford a
person an exemption from vaccination. Additionally, can you please confirm
whether this lint is exhaustive.

4. According to your policy, the government’s perception is that Covid-19 is very
serious, how is it then that the policy affords exemptions to employees of the Sir
Lester Bird Medical Center and Community Clinics?

5. Has the government considered that Rastafarian Community is refusing the

vaccine for religious purposes? Have their refusal which is based on religious
belief been considered?

The ABPSA has given the Prime Minister and his cabinet until 5:00pm on Sunday
19 September 2021, to respond to their letter.

President Peters says “for the avoidance of doubt, we want to make it pellucid that
we are more than eager to work the Government of Antigua & Barbuda to ensure
that the fears and concerns of our members and that of the wider community are
given serious consideration through empathy and workable alternate options. We are
open and available for further discussion on the issue as we would not like to
see the continued negative impact the virus has been having on the Country’s
economy and the lives of its citizens”.

The Association has declared Monday 20 September 2021, a “National Day of Rest
and Reflection” is urging all workers to stay at home on the day and then report for
their normal work duties on Tuesday 21 September as usual and points out that if
any worker is asked to leave for whatever reason, they should request a letter from
their supervisor or manager indicating the reason for their removal from office
The letter she says should be specifically include the name and address of the worker
and signed by officer who has issued the instructions.

Mrs. Peters continues to stress to the ABPSA members that the union will stand
steadfast in their commitment and support of their workers’ rights during this
challenging period.