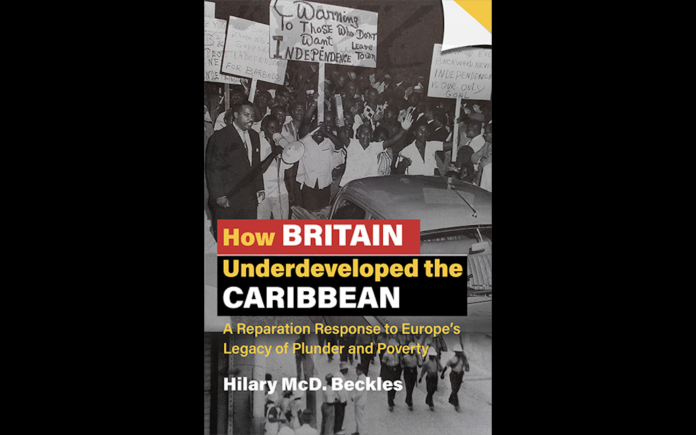 Internationally acclaimed Economic Historian, Social Justice and Minority Empowerment Activist, Professor Sir Hilary Beckles, launched his latest publication on February 25. The new book, How Britain Underdeveloped the Caribbean: A Reparation Response to Europe’s Legacy of Plunder and Poverty, explores how successive governments have systematically suppressed economic development in their former colonies and have refused to accept responsibility for the debt and development support they owe the Caribbean.

Published by The UWI Press, the book, is a continuation of the ground-breaking work Sir Hilary began in Britain’s Black Debt: Reparations for Caribbean Slavery and Native Genocide.

Strategically timed, it is launched in celebration of the 50th anniversary of two of the Caribbean’s foremost works on economic history; Sir Walter Rodney’s ‘How Europe Underdeveloped Africa’ and George Beckford’s ‘Persistent Poverty: Underdevelopment in Plantation Economies of the Third World’. In addition, it fits within the context of the 60th year of Independence of Jamaica and Trinidad and Tobago.

The thesis is that Britain extracted 300 years of wealth from the region, “sucked it dry like an orange” according to Eric Williams, and systematically subverted every indigenous development initiative from the region, preferring a dependency aid model instead. Arthur Lewis, he showed, stated in 1939 that Britain benefitted from 200 years of free labour from 20 million Caribbean people, a “debt it owes the region” which, if paid, can be used to fund a development plan for the Caribbean. He reaffirmed the Lewis argument and shows its powerful relevance for the future. Britain, he writes, must be held accountable by the governments of the region for the plunder of its people that has left them in poverty under white supremacy economic dependency.

Suggesting that the book is instructive to Caribbean people at large, Sir Hilary asserts “We must ask the question of where do we go next? We should not blunder into the future without an ideological and intellectual road map…This book looks to the post-COVID economic development frontier. It seeks to contribute to the narrative and the call for a new world economic order in which there is real hope and opportunity for developing countries, especially post-colonial developing countries.”

Among the readers and reviewers offering commentary at the launch were Professor Verene Shepherd, Director of the Centre for Reparation Research at The UWI; Dr. Patricia Rodney, Adjunct Professor in the Department of Community Health and Preventive Medicine at Morehouse School of Medicine, Atlanta, Georgia, and CEO of the Walter Rodney Foundation; and Professor Rupert Lewis, Professor Emeritus of Political Thought in the Department of Government at The UWI, Mona Campus.

According to Professor Shepherd, the book is a “powerful and timely masterpiece; a roadmap for redressing the indecency of colonialism.” Dr. Rodney, adding her unique perspective, described the new book as “the first scholarship of this magnitude about the region in the 50 years since Walter Rodney published How Europe Underdeveloped Africa.” Professor Lewis called it “sound empirical evidence that British slavery and colonialism have been at the foundation of underdevelopment and persistent poverty in the West Indies.”

Commenting on the outstanding features of the almost three-hundred-page publication, Dr. Luz Longsworth, Higher Education, Leadership and Management Specialist and former Chair of The UWI Press, who served as the Chairperson of the proceedings, said “It is simply amazing that this book spans over 500 years of history from the first entry of Columbus to the independence discourse. It cites hundreds of scholarly books, articles, never before seen documents from British Parliaments of the 17th through the 20th centuries [and] has what I call a gallery of dozens of faces of apologists, imperialists, West Indian activists, and intellectuals.” She called it an evocative and entertaining book, very readable and accessible to both scholars and the average reader.

In his reflections on the book’s origins, Sir Hilary openly shared memories of arriving to teach at the Mona campus and confronting the outcomes of tension between the Economists and Historians. Himself a product of a department where the curriculum was equal parts Economics and History, Sir Hilary found himself straddling two faculties and fraternities at the Mona campus. “This book is a product of that disciplinary hybridity, where half of my training was as an Economist and the other half as a Historian, and I wanted to bring these narratives together.”

According to The UWI Vice-Chancellor, the book dedicated to the Mona Campus has been in planning for 30 years. “I’ve always wanted to write this book and I saw it as the last book I would ever write, pouring into it all my experiences as a teacher.” He went on to explain the emotional and mental circumstances that saw it birthed in 2021. “…COVID-19 struck, and I saw the devastation of life and health. I thought I had better write it because health is not guaranteed.”

Sir Hilary affectionately refers to his new publication as his ‘Mona book’. “This book was conceived at the Mona Campus where I taught in the 1980s and now it is born here at Mona. It is my tribute to the Mona Campus and to the intellectual community here over the last four decades” he said.

Among the special guests in attendance at the book launch were: The Most Honourable Professor Sir Kenneth O. Hall, Former Governor-General of Jamaica; The Most Honourable PJ Patterson, former Prime Minister of Jamaica; His Excellency Patrick Robinson, Judge of the International Court of Justice; Pro Vice-Chancellor and Principal, The UWI Five Islands Campus, Professor Densil Williams; and Professor the Honourable Ambassador Richard L. Bernal. Lady Mary Beckles and other immediate members of the family also shared in the moment.

Purchase your copy of How Britain Underdeveloped the Caribbean from UWI Press online at bit.ly/32oCYfW or order from Longleaf Services, Inc. via [email protected] Get 35% off with promo code: 03BC22. Valid from February 25 to March 31, 2022 (Conditions apply). For more information, contact [email protected]