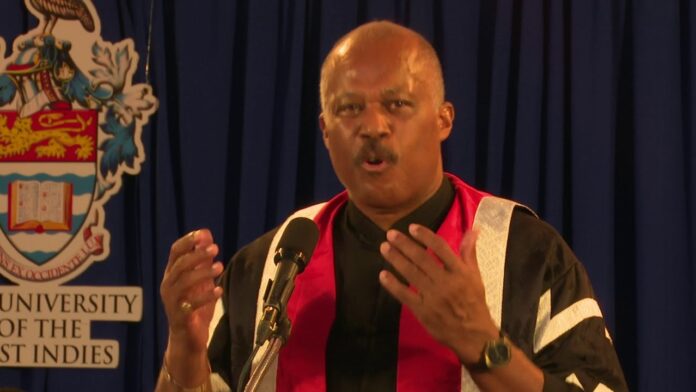 — Vice-Chancellor of The University of the West Indies, Professor Hilary Beckles has called on the Organization of American States (OAS) for coordinated, organized global investment in the Caribbean.

Speaking during an open dialogue with Secretary General of the OAS, His Excellency Luis Almagro on April 14, 2021, which marked the observance of Pan American Day, Sir Hilary stated that despite the fact that the Caribbean has always stood on its own feet, a combination of events including public health, chronic diseases and climate change has devastated the region in the last 10-15 years.

Professor Sir Hilary Beckles was invited by Secretary General Almagro to speak on The UWI’s support in the region in response to the COVID-19 pandemic, during this first of a virtual series entitled, “A Chat with the OAS”.

He noted the regional University’s responsibility as a public and ethical institution to serve the people of the Caribbean, particularly during moments of great difficulty. However, he observed, “When we look at the Caribbean within the context of the hemisphere, examining our specific issues, we see that we are faced with some major challenges, most of which are not of our making. Most of them originated in history and we are living through the legacies of these issues.” He affirmed, “The Caribbean has given a great deal to this hemisphere and the world and it is now time for this to be reciprocated to give Caribbean what it deserves and what it has a right to—which is an economic leg up at a moment of growing despair.”

In outlining the Caribbean’s current extreme vulnerability, Sir Hilary stressed the need for discussion and strategy development “for a special carve-out to get to global competitiveness.”

Professor Beckles pointed out that the region is classified as a middle income part of the world, and doesn’t benefit from the relevant financial support that less developed countries are entitled to because of the GDP per capita measurement of development. Instead, he asked the Secretary General for his insight on policies and considerations for a ‘vulnerability index’ to accommodate for the Caribbean.

“The permanent vulnerabilities of Caribbean people are a special concern for us,” His Excellency Luis Almagro responded. In agreement with Sir Hilary’s call for justice and ethical relationships in qualifying support for the Caribbean, His Excellency added, “It is not only that you are paying the consequences of colonisation, it was a very special colonization…I don’t feel that we can complete the process for independence (in the Caribbean) without reparation. Definitely there is a responsibility for all of this and every country should assume its responsibility.”

Speaking more broadly on the OAS’ current agenda, he said, “Our main recommendations include a call to the world’s most developed countries for debt relief for the region through grants and low cost loans; increased resources from Inter-American organizations to assist with extraordinary commitments and related political expenses, financial support to transform to digital economies and develop a resilient infrastructure facility to exploit the blue economy; funding for strategic regional maritime space security as well as institutional capacity and strengthening under the CARICOM regional security management framework and establishment of a Caribbean recovery fund for rapid response in the case of natural disasters and proactive planning to minimize damage.” The Secretary General added, that the work related to reparatory justice should be included and would be taken into special consideration.