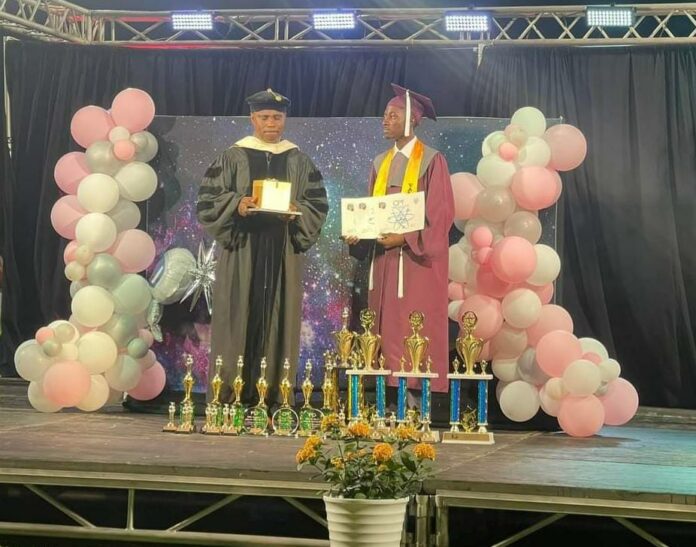 He highlighted the challenges and obstacles he and his classmates had to overcome during Covid-19 while addressing the graduating class in his valedictory speech.

“We were tossed in a pandemic from the third form to present, adapting to remote learning, then blended learning, a host of new protocols, and getting accustomed to things changing ever so often at short notice; it was the norm.

Only recently did we have some semblance of normalcy. It was a challenging two and a half years,” Reid remarked.

Observer spoke to Reid’s father, Alex Reid, who said that the family was sure that he would emerge as the top student in the class of 2022, given that he has always excelled throughout his academic journey.

“It was a very proud moment for myself and my family. We had no doubt in our minds that this young fella had it in him.

From since primary school going up, it has been a joy to see every year from first form right up to fifth that he is on top of his game,” Reid’s father said in an interview.

Echoing similar sentiments on Reid’s consistent academic performance was veteran educator and principal of Princess Margaret School, Dr Colin Greene, who used several adjectives to describe the strength and determination shown by the top student throughout the years.

“His manner and method are impeccable. From the very first day of school to the final hour, Jadon was a gift from the Five Islands Primary.

He displayed diligence, passion, an unrelenting willingness to learn, serve and lead; he had an exemplary standard of decorum and personal ethics that distinguished this young man as an exceptional candidate for great academic achievement,” Dr Greene said during the ceremony.

Additionally, Greene described Reid’s school records as “flawless,” and they will remain as a permanent reminder of the school’s excellence.

“His flawless secondary school career extended beyond the copious collection of honor roll certificates, principal list awards, and an unbroken five-year period of placing first in class every time.

Jadon stands not only as our valedictorian, but he has etched his name permanently in the academic records of the Princess Margaret School, attaining the finest academic performance since the school opened its doors in 1955,” the headmaster added.

Meanwhile, Reid, currently enrolled in the Liberal Arts Department at the Antigua State College, also walked away as prom king at the Sandals Grande Antigua on Saturday evening.