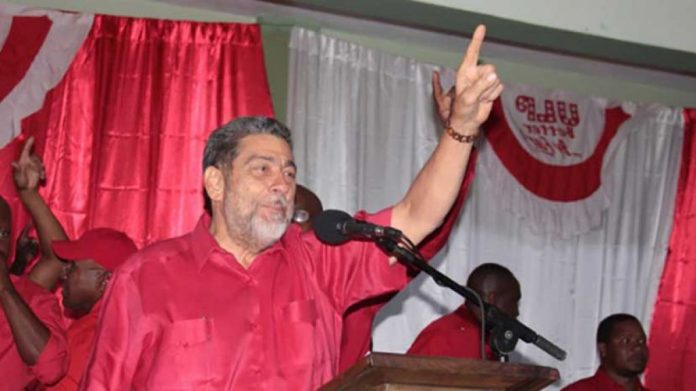 IWNSVG: The incumbent Unity Labour Party (ULP) was returned to office in Thursday’s general elections with a one-seat increase in its margin of victory, winning nine seats to the main opposition New Democratic Party’s (NDP) six.

The ULP’s Carlos James, a former senator and Speaker of the House of Assembly, wrested the North Leeward seat from the NDP’s Roland “Patel” Matthews by seven votes, according to preliminary results released by the Electoral Office.

James reversed the 12-vote victory that Matthews secured against him in 2015, when he secured a second consecutive five-year term.

The results are in keeping with the trend in North Leeward, a constituency in which no politician has ever secured three terms.

ULP, under the leadership of Prime Minister Ralph Gonsalves, 74, has secured an unprecedented five consecutive terms in office.

Gonsalves secured an expected win in North Central Windward, which he has been representing since 1994.

He defeated first-time candidate Chieftain Neptune, of the NDP, by 2,853 votes to 886, while Kadmeal McFee, one of two candidates fielded by the SVG Green Party, got 10 votes.

In securing a fifth term in office, the ULP dashed Godwin Friday’s hopes of becoming the nation’s fifth prime minister.

Friday, however, secured a fifth consecutive term as MP for the Northern Grenadines, defeating first-time candidate, Carlos Williams, of the ULP, 2,123 votes to 458 in the traditional NDP stronghold.

Also winning five-in-a-row was the NDP’s Terrance Ollivierre in the Southern Grenadines, where Edwin Snagg lost for a sixth consecutive occasion, earning 659 ballots, compared to Ollivierre’s 1,153.

Also securing a five-term win was Montgomery Daniel, who retained the North Windward seat for the ULP by a mere 69 votes.

In one of several results that would give analysts much to mull over, Daniel secured 2,625 votes against first-time candidate Shevern John, of the NDP, who garnered 2,556 votes.

This was a significant reduction in Daniel’s margin of victory, when in 2015, he defeated the then NDP candidate, Lauron “Sharer” Baptiste by 323 votes in a poll, the results of which are still the subject of an election petition that is before the Court of Appeal.

In East St. George, there was another strong showing by a female first-time candidate, where the NDP’s Laverne Gibson-Velox lost by 186 votes to Finance Minister Camillo Gonsalves.

Gonsalves, who is heir apparent to his father, the prime minister, obtained 2,845 votes compared to the 2,659 that Gibson-Velox, a first-time candidate was able to attract.

The victory compares to the 607-vote win he secured in 2015 against the NDP’s Linton Lewis, who was losing for a fourth time in the St. George’s constituency.

In the 2015 polls, the finance minister secured the highest number of votes, eclipsing his father, the prime minister.

And, in West St. George, Kay Bacchus-Baptiste, the other female candidate for the ULP, lost to another first-time candidate, Curtis King of the ULP.

However, Bacchus-Baptiste was able to improve her party’s showing in the polls with the 2,249 votes she gained against King’s 2,606.

The ULP’s Debbie Charles also failed to win her seat, losing to the NDP’s Daniel Cummings, who was returned to the national assembly for a third consecutive term.

In 2015, when Charles entered politics, he defeated Charles by 444 votes.

And, Mineva Glasgow, the only other woman candidate in the race, suffered a trouncing at the hands of the NDP’s Nigel “Nature” Stephenson as she made her first attempt at the polls.

Elected to Parliament for the first time is the ULP’s Orando Brewster, who secured a convincing 521-vote victory over the NDP’s Benjamin Exeter in Central Leeward.

Brewster got 2700 votes, compared to Exeter’s 2179, a better showing than former deputy prime minister Sir Louis Straker, who came out of retirement in 2015, to contest the seat for yet another time.

In 2015, Sir Louis won the seat by 313 ballots in a vote that is still the subject of an election petition that is still proceeding before the Court of Appeal.

In East Kingstown, another first-time candidate was elected to Parliament as Minister of Health, Luke Browne, suffered a third consecutive defeat.

This time, it was at the hands of Dwight “Fitzgerald” Bramble, who replaced former NDP leader Arnhim Eustace, 76, who did not seek re-election after five terms, in the face of declining health.

Not only did Bramble retain the seat but he significantly increased the margin of victory, garnering 2,547 votes, compared to Browne’s 2,306 — a difference of 241, compared to the 149-vote victory Eustace secured in 2015.

Returning to Parliament for a third term as MP for South Central Windward is Minister of Agriculture Saboto Caesar, who is in the mix to become the next leader of the ULP and prime minister.

Caesar defeated first-time candidate Israel Bruce of the NDP, 2,339 votes to 2,100, a margin of 239 — compared to the 588-vote victory he chalked up when the NDP’s Addison “Bash” Thomas made his second bid to win the seat.

The ULP held on to the South Windward seat, where Frederick Stephenson was elected to a third term, having gained 2,138 as opposed to 1,921 for the NDP’s Noel Dickson, who was making his second bid to win the seat.

Stephenson’s margin of victory on Thursday stood at 217, compared to 759 in 2015, when there was a four way race in which the Green Party got 4 votes and no ballots were cast for the Democratic Republican Party (DRP).

In Marriaqua, the NDP’s Bernard Wyllie, who returned to politics 22 years after he was voted out of office, lost again, when the ULP’s St. Clair “Jimmy” Prince secured 2,441 votes, compared to Wyllie’s 2,088.

The 353-vote victory compared to the 756-vote victory that Prince, then a first-time candidate, secured against Curtis Bowman, of the NDP, who was making his second bid to win the seat.

In Central Kingstown, the NDP’s St. Clair Leacock was returned for a third term with an even larger margin.

In 2015, Leacock defeated Beresford Phillips of the ULP by 516 votes.