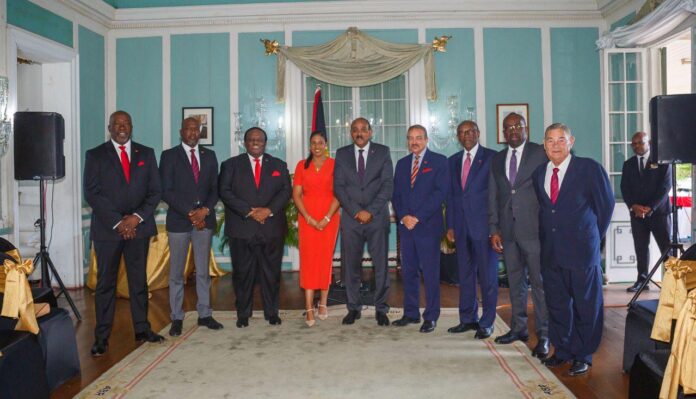 Prime Minister Gaston Browne Friday unveiled an eight member Cabinet that was sworn into office  following Wednesday’s nail-biting general election that resulted in his ruling Antigua and Barbuda Labour Party (ABLP) being returned to office for a third consecutive occasion, but with a drastically reduced majority.

“I am not a fan of bringing individuals through the Senate to serve as ministers. I believe it is important to pay attention to the quality of the candidates who the people elect and who could also serve as ministers,” Browne told reporters at the swearing in ceremony.

The ABLP won the general election by a 9-8 margin, down from the comfortable 15-2 majority it had enjoyed in the last Parliament.

Apart from the main opposition United Progressive Party (UPP) winning six seats-five more than it previously had- another successful candidate was Asot Michael, a former government minister who fell out with Prime Minister Browne and was prevented from contesting the St. Peter constituency on a ticket of the ruling party. Michael, who had been the parliamentary representative for the area over the past four general elections, won the seat as an independent candidate.

Browne told reporters that the government ministers who lost their seats in the general election, their portfolios have been consolidated among the eight new cabinet members with the veteran Sir Robin Yearwood, agreeing to serve as a government backbencher. He had held the position of senior minister in the last administration.

‘What we tried to do is to ensure that there were synergies within the respective consolidation that took place. For example, housing and works, the obvious synergy is there, even agriculture and trade.

“So I think we have achieved that and I am confident that even though the team is smaller that we will have a far more responsive team and the people of Antigua and Barbuda in essence will get from less,” he said.

Prime Minister Browne said in addition, Sir Robin, who has served as a representative for St. Phillip’s North since 1978, will also be appointed deputy speaker in keeping with the provisions of the Antigua and Barbuda Constitution where “one of us had to serve as the deputy speaker.

Browne said the government’s agenda going forward will also be informed by the results of the general election, particularly in the area of the delivery of water.

The following is the list of the members of the Cabinet.