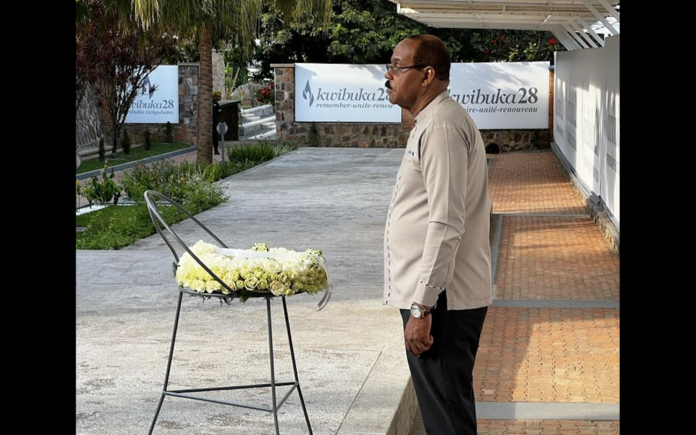 KIGALI, Rwanda – 23rd June 2022……….Prime Minister the Hon. Gaston Browne on Thursday made an official visit to the Kigali Genocide Memorial in Rwanda.

The Memorial is the final resting place for more than 250,000 victims of the Genocide against the Tutsi and is one of six such memorials in the country.

Over a period of 100 days from April to July 1994, it is estimated that nearly one million ethnic Tutsis and moderate Hutus were killed in what has now been called acts a genocide.

The Kigali Genocide Memorial was inaugurated in 1994 with five main objectives:

After a guided tour of the Memorial which included moving recordings from survivors, pictures of massacred victims including babies and a historical overview of a harmonious Rwanda before the divisive arrival of German and Belgian colonialism, Prime Minister Browne was visibly moved by the stories and images of the terror that was unleashed across Rwanda.

The Prime Minister signed the Book of Remembrance and participated in a wreath laying ceremony on behalf of the Government and People of Antigua and Barbuda.