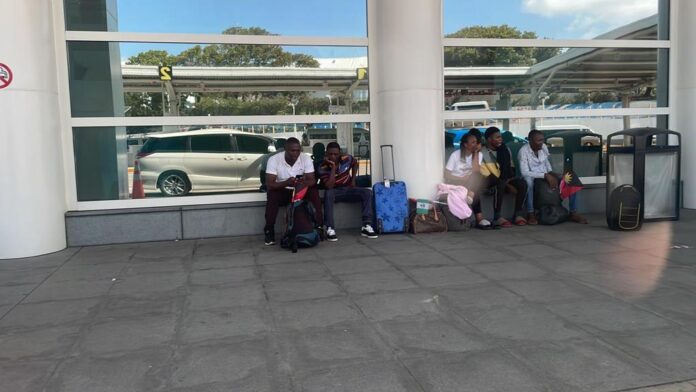 REAL NEWS:Residents are asking about the benefits of last week’s inaugural direct flight from Nigeria, since recent reports indicate that many of the visitors have no intention of returning.

While reports say that “over 100” visitors arrived here from the African continent, no specific number has been disclosed, to date, by Immigration authorities or the Cabinet.

However, Airport sources have said that only 38 passengers left on Sunday’s return flight to Lagos.

Where the balance of passengers have disappeared to remains a mystery to most people. But a known associate of Antigua Airways has claimed that some of the visitors went on to other Caribbean destinations, including St. Kitts, while unconfirmed reports allege that others were denied entry to Grenada.

What has been confirmed, however, is that one remaining female visitor is pregnant with an imminent delivery date.

Hospital sources tell REAL News the woman went to the Sir Lester Bird Medical Centre seeking attention, but she was deterred by the cost of a certain test and therefore left the hospital.

Upon learning of the impending birth, several locals are expressing surprise that the young woman was allowed to take a transatlantic flight so close to her delivery date.

They note, too, that the birth will likely take place within the 30-day period of the visa granted on the woman’s arrival here. And they ask whether the child’s place of birth will confer residency rights on the mother.

Meanwhile, an Antiguan national reports that he befriended a pair of the Africans who apparently have moved into his neighbourhood. In the course of getting to know them, the local man – a civil servant – says he was told that the two are expecting to set up businesses here after their belongings arrive by ship.

According to the man, the Africans claim their equipment and inventory were packed into a container for shipping to Antigua and Barbuda, and they will be seeking clients as soon as these things are landed.

The amazed resident says this indicates that the flight was never about a visitor experience; rather, he says, it was an opportunity for persons to come here to live and work – and compete with locals in an already tight economy.