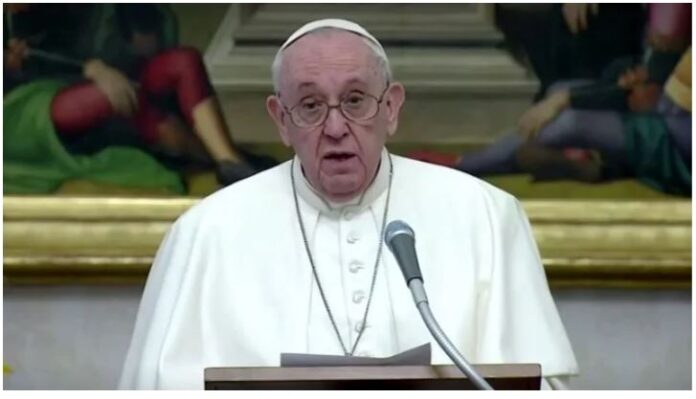 The Congregation for the Doctrine of the Faith (CDF) stated that the Catholic Church cannot bless same-sex unions, the Vatican said on Monday, March 15, 2021.

Does the Catholic Church have the power to give blessings to same-sex unions? The answer is: Negative.

The Congregation for the Doctrine of Faith says it loves the sinner, but this does not mean the Church justifies a sin.

Catholicism sees the bond of marriage as a union between a man and a woman who are open to life and procreation.

In response to a “dubium” (doubt) question put to it, the Congregation for the Doctrine of Faith (CDF) of the Catholic Church said, “We cannot consider such blessings licit.” So, priests should not bless homosexual couples who ask for some type of religious recognition of their union, the CDF stated. Pope Francis “gave his assent” to the publication of its response to the dubium, confirmed the CDF.

The Church is not saying no to same-sex marriages. It is saying no to the pure eventuality that gay unions – be they de facto or de iure, sanctioned by a very secular public document as by a private agreement – can get any form of blessing from the Catholic Church which governs her people, but not at the cost of following the trends of the century, reported AGI.

“We love the sinner, writes the Congregation for the Doctrine of the Faith, but this does not mean that the Church justifies a sin.”

Cardinal Luis Ladaria, prefect of the former Holy Office and material writer of the denial of blessings and of the explanatory note participated in the announcement as well as Bergoglio himself who “in the course of an audience granted to the undersigned Secretary of the Congregation, was informed and gave his consent.” The secretary, for the record, is the archbishop of Cerveteri (Lazio region) Giacomo Morandi.

In the traditional form of the question – the “dubium” – and of the answer, here is the question in summary. Dubium: “Does the Church have the power to give blessings to same-sex unions?” The answer was: “Negative.”

Detailed explanations follow summarized information as follows: “The blessing, in whatever form it may be, cannot be imparted in any way to a situation marked by sin, since one is not faced with a couple united by the bond of marriage understood as between man and woman and open to life and procreation. Indeed, not even one of these preconditions materializes. Blessing could be taken for a substitute form of recognition and equalization, so it cannot be.”

This is all despite the fact that “in some ecclesial spheres, projects and proposals of blessings for same-sex unions are spreading.” Of course, “these projects are not infrequently motivated by a sincere will to welcome and accompany homosexual people, to whom paths of growth in faith are proposed, so that those who manifest the homosexual tendency can have the necessary help to fully understand and realize God’s will in their life.”

But it is one thing to accompany, understand, and interact, and quite another to give the impression of equating, justifying, recognizing, and admitting.

“When a blessing is invoked on some human relationships, it is necessary that what is blessed is objectively and positively ordered to receive and express grace, according to the plans of God inscribed in Creation and fully revealed by Christ the Lord,” explains in a document signed by Cardinal Ladaria.

“Only those realities which are in themselves ordered to serve those designs are compatible with the essence of the blessing imparted by the Church.”

Therefore, “it is not permissible to impart a blessing to relationships, or even stable partnerships, which involve a sexual practice outside marriage (that is, outside the indissoluble union of a man and a woman open in themselves to the transmission of life), as is the case with unions between persons of the same sex.”

Of course, in some cases in these unions, real “positive elements, which in themselves are also to be appreciated and valued” can be recognized, but no – the ecclesial blessing is not: “these elements are found at the service of an unordered union to the design of the Creator.”

Another point follows, particularly delicate for the Church: “The blessing of homosexual unions would in a certain way constitute an imitation or a reference to analogy with the nuptial blessing.” That is: be careful not to make the blessing, given in good faith, the antechamber of the recognition of a marriage union.

This is why we cannot speak of “unjust discrimination” against homosexuals. The Church does not discriminate against them as such but limits herself to “recalling the truth of the liturgical rite and of what deeply corresponds to the essence “of the sacraments.”

“Everyone in the Church welcomes people with homosexual inclination with respect and delicacy, and will know how to find the most appropriate ways, consistent with ecclesial teaching, to proclaim the Gospel in its fullness.”

Homosexuals “recognize the sincere closeness of the Church and accept its teachings with sincere availability.” It is not “excluded that blessings are given to individuals with homosexual inclination” but on condition that “they manifest the will to live in fidelity to God’s revealed plans as proposed by ecclesial teaching.”

Because the crux (cross) of the matter is always the same: “We declare every form of blessing that recognizes their unions illicit,” because the Church “does not bless nor can it bless sin: it blesses the sinful man, so that he may recognize that he is part of her plan of love and allow himself be changed by Him.”