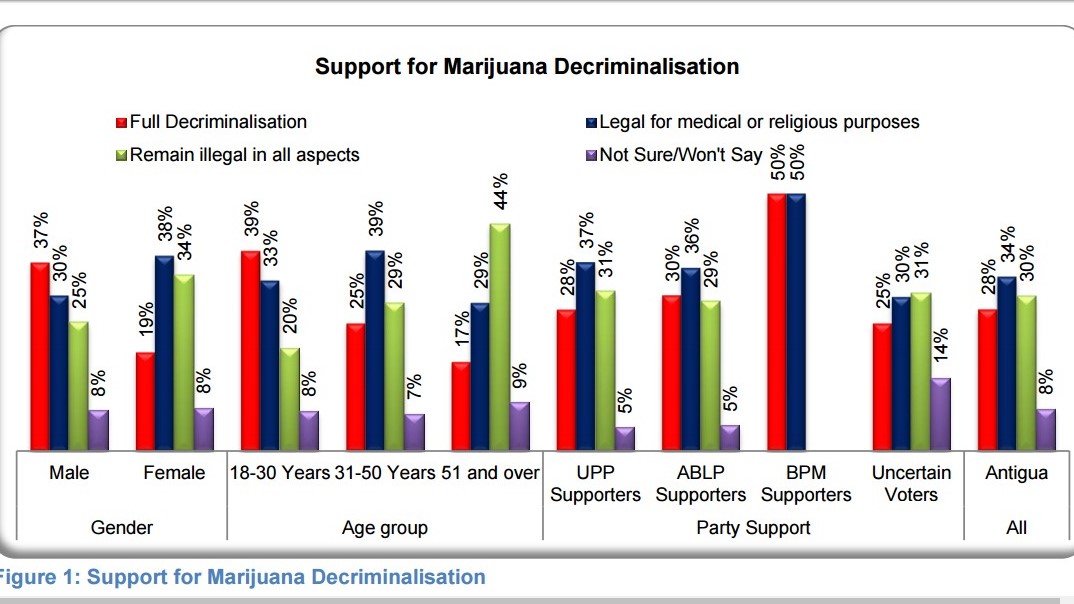 A marijuana poll conducted by the Caribbean Development Research Services Inc (CADRES), is taking on new significance as consultations commence on the decriminalisation of ganja.

The poll was conducted last August and showed that 62 per cent of residents support some form of marijuana decriminalization.

But it also demonstrates the thinking of young people, women, and older persons in the ongoing debate.

Noted pollster Peter Wickham told Antigua News Room, “the significant thing about the Antigua poll is that it was the most recent done in the region and was conducted after the Prime Minister indicated that government was considering decriminalizing small quantities.”

“The result which shows majority support for decriminalization was therefore not surprising since the global and regional trend is in that direction and Antiguans are clearly “on-board” with this more liberal attitude.”

Wickham said it is also noteworthy that the support level for decimalization in Antigua was the highest of the three countries that CADRES surveyed at that time.

According to the CADRES poll, at the national level, the single largest portion of the population now supports what is commonly referred to as “decriminalisation” as distinct from “legalisation”. 34% now support marijuana being made legal for medical and religious purposes, while 30% would prefer that marijuana remain illegal in all respects. 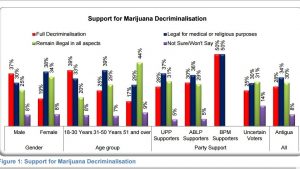 In terms of demographics, the poll found that women in Antigua are more inclined to support the status quo and while more of them would support partial decriminalisation, less are inclined towards a full legalisation of marijuana.

Regarding age, younger people are more disposed towards full decriminalisation, while older Antiguans heavily support the retention of the status quo.

According to CADRES, the party support comparisons; however, demonstrate that there is no significant political correlation at this time which means that supporters of the ABLP or UPP are no more or less inclined to support or oppose decriminalisation.

“In this regard it is important to note that Barbados and Antigua could be considered Ganja consuming country while St. Vincent is presumably both a supplier and consumer, which might influence public opinion,” the poll noted. 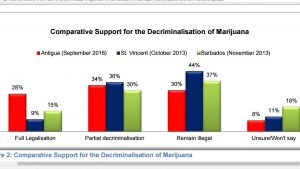