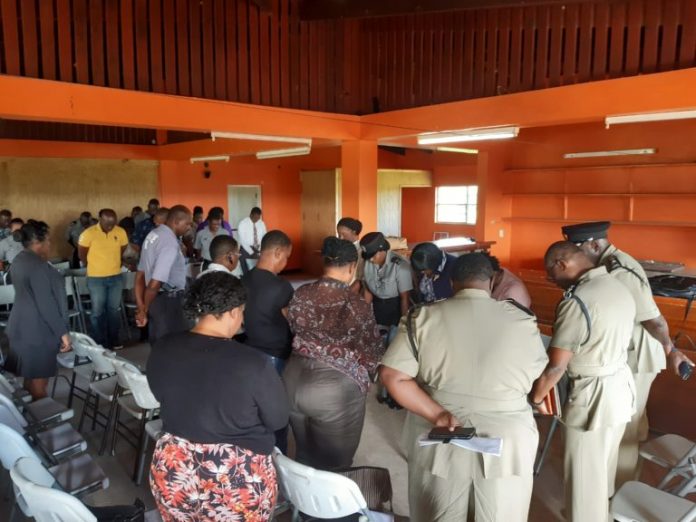 A closed-door meeting to address the issue, with the Attorney General, the Commissioner of Police and the Welfare executive and its members, was set for November 25, 2019.

However, the planned meeting was postponed by Steadroy Benjamin, Attorney General, what occurred on Monday morning seems to have set the stage for further industrial action.

Corporal Harris could be heard pleading with the Commissioner to take a few questions from the membership, but Rodney refused, as he headed out the door, accompanied by Deputy Commissioner of Police, Albert Wade.

“He disrespectfully walked out on us, as if we are nothing” acting Welfare Association chair, Corporal Marilyn Harris said, addressing the members.

Before Rodney left, however, he expressed that he was not keen on the media being privy to the content of Monday’s meeting.

“What I would advise out of that meeting, and if that’s the format you want to use with documents and writing out the [other] concerns that you may have, you can always list them after your discussion; write them and present them” he stated, as he grabbed his police hat and walked out of the meeting, just 30 minutes after it began.

The members were unhappy with the outcome and utter sentiments of frustration; some expressed that the police force “is run down to the ground” because of the people who have been successively but unproductively placed in leadership roles.

Corporal Harris, who reminded the membership that the Commissioner “did not stay for one question,” told the crowd that “I am 24 years now in the police organisation and when I became a police officer I would have met persons here claiming that they were fighting for the rights of the police and 24 years after, things are worse than before.”

“We are not anti-administration, we are not anti-government, we are about getting the respect that is due to us here in Antigua and Barbuda. We are being disrespected from all angles. How can we say that we have an administration that supports us,” the officer explained?

The executive has therefore taken the decision to continue to stage the on-duty sit-in today until they are able to resolve their problems amicably.