Another illegal weapon has been removed from the streets. Law enforcers say it was seized during an operation on Christian Street in Grays Farm about 9:30 last night.

The police reportedly searched a car owned and driven by Kirk Michael of Gambles Terrace and found a 9mm semi-automatic pistol and several rounds of ammunition. 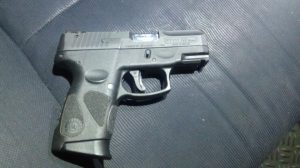 Michael was arrested and charged and the weapon and ammunition were taken to the St John’s police station as investigations continue. A wrecker was used to take his vehicle to Police Headquarters.

Michael reportedly told investigators he purchased the weapon on the streets for five thousand dollars.