More than a dozen people were arrested and are in police custody after police found one .25 pistol along with five matching round of ammunition inside a Campsite home on Friday.

The illegal gun was found hidden inside a red and white sneaker in a bedroom. 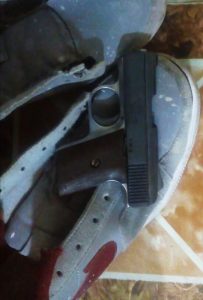 The firearm was seized and taken to the police station, as investigations continue into the matter.

To date, police have removed three illegal firearms and approximately two dozen rounds of ammunition from off the streets.