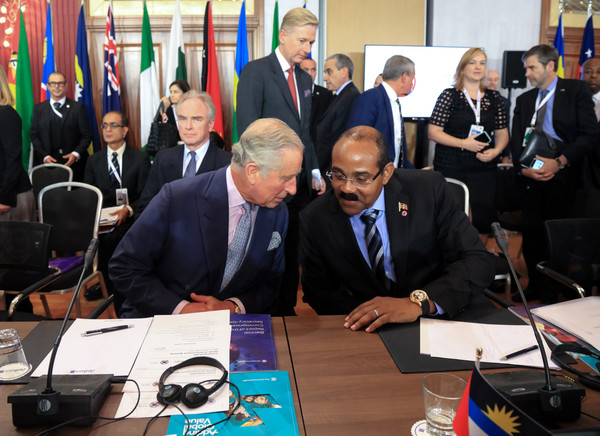 A high-level delegation from Antigua and Barbuda will attend the Commonwealth Heads of Government Meeting in London from the 18th to the 20th of April 2018.

The delegation will be led by the Honourable Gaston Browne, Prime Minister of Antigua and Barbuda.

The Theme for this year’s Commonwealth Heads of Government Meeting is “Towards a Common Future”. It will focus on four key priority areas which reflect the global challenges, to which, the Commonwealth must adequately respond. They are namely: fairness, prosperity, security and sustainability.

Prime Minister Browne is expected to deliver feature remarks to leaders at the summit. His remarks will largely focus on de-risking, a serious concern for the Caribbean region and one which is threatening the economic prospects of Antigua and Barbuda.

In his remarks, the Prime Minister will outline necessary and urgent steps that must be taken to avoid the disaster that derisking will cause to the nation’s economy.

According to Prime Minister Browne, “the provision of correspondent banking services is a lifeline to Caribbean economies without which the region would be excluded from the global finance and trading system with grave consequences for maintenance of financial stability, economic growth, remittance flows and poverty alleviation. I will be making it clear to my colleague heads that this is a serious humanitarian concern that demands urgent attention from the international community.”

Further, the Prime Minister is expected to discuss the impact of climate change and the need for greater collective action to assist small states with adaptation measures inclusive of preparations for more adverse weather conditions.

Minister Greene will also attend a series of bilateral meetings with the Prime Minister to strengthen existing relations and forge new relations with friendly countries.

Minister Greene is also expected to attend a forum on small states to discuss critical issues affecting small island developing states. Speaking of the Commonwealth, Minister Greene stated: “I believe this is one of the most important forums where the issues of Antigua and Barbuda can be heard by our colleague Heads of Governments and Foreign Ministers from across the world. The Commonwealth spans well over 50 countries, which share a common history and common values. The Commonwealth provides a large platform on which Antigua and Barbuda can articulate its views on several key issues of national importance such as climate change, access to finance for small vulnerable states, and de-risking”.

The Honourable Maria Browne is also expected to deliver remarks at a high-level roundtable discussion on the role of women in politics.

In addition to the above, several important meetings with key business leaders in the United Kingdom have been scheduled where the delegation will discuss important trade and investment opportunities for Antigua and Barbuda.

The Prime Minister and delegation will also meet with members of the Barbudan diaspora and donors who have contributed to the ongoing relief effort for the island. Prime Minister Browne is expected to provide an update on the current situation on the island. Finally, the delegation will attend high-level meetings with key representatives of the British cabinet to discuss the Barbuda relief effort and issues affecting members of the Antigua and Barbuda UK diaspora.

The Commonwealth of Nations is an intergovernmental organization that comprises          53 member nations and the Commonwealth Heads of Government Meeting is one of the largest summits for world leaders across the globe. It is the only one where all world leaders sit as equals irrespective of country or population size. It represents the most important forum for the issues of small island developing states to be heard and addressed by the international community.