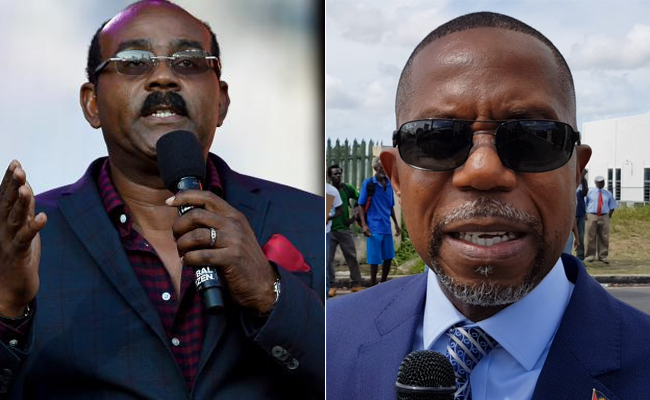 Prime Minister Gaston Browne has a warning for Barbuda Representative Trevor Walker. It comes days after a seemingly amicable resolution to the row between Central Government and the Barbuda Council over control the Fisheries Complex on the sister isle.

“We are taking a firm stand,” Browne on Pointe FM radio yesterday afternoon.

“(If) Trevor Walker incites any form of violence in Barbuda or does anything illegal, me personally go put pressure on law enforcement to deal with him,” PM Browne said.

The use Barbuda resources and overall island direction have been an ever-growing source of contention between the ruling administration and the people of Barbuda. The land, the sand, and now the area of fisheries have all evoked the ire of central government and the Barbuda Council, with both claiming to have final jurisdiction in areas aforementioned.

Walker has long been insistent that law enforcement, “Doesn’t seem to know the law.”

“There are certain autonomies given to Barbuda based on the Barbuda local government Act that is apart of the Constitution. So, the top brass of the officers should have been au fait with what (the Council) is responsible for and what we’re not responsible for.”

The Barbuda Local Government Act speaks to the functions, powers and duties of the Council in PART V:

Subsection 4 (c) gives specifies that the administration of fisheries falls as one of the duties of the Council.

The Barbuda MP has also made it clear to PM Browne that, “Under no circumstances, that I’m gonna agree to allow the (Fisheries) keys to be turned over to the police.”

The prime minister was adamant about threat of police action and unfazed by the specter of Cabinet control and direction of the force.

“They can call it interference or whatever they wish, don’t matter. (I) will pick up the phone and call the commissioner and tell him, ’deal with that,’” PM Browne said.

His comments come after a recent round of denials by the Antigua Barbuda Labour Party (ABLP) administration of the government directing the police force.

The latest standoff between the leaders on both islands of the unitary state escalated between last Sunday and Monday, with the Walker-led Barbuda Council refusing to relinquish control of the fisheries complex to police officers. The officers were housed in the building in the wake of Hurricane Irma. The Council, meanwhile, reported that they needed to regain control given the start of the lobster season to facilitate exportation.