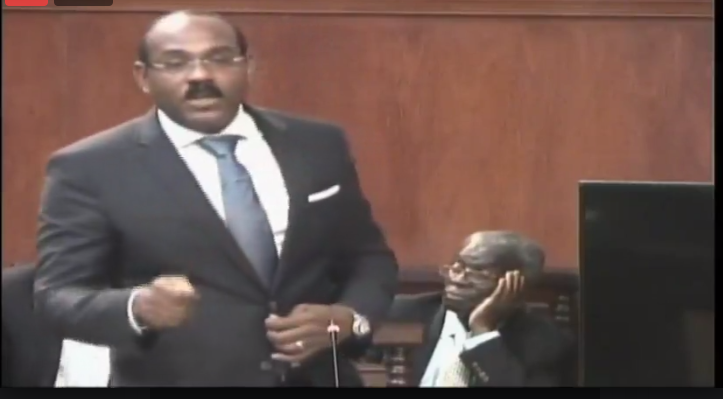 Prime Minister Gaston Browne has told police officers that he doesn’t expect them to continue incriminating marijuana users in light of government’s intention to decriminalise the drug.

Amendments to the Misuse of Drug Act are now before a joint select committee of the Parliament after its first, second and third readings in the Lower House.

The new law will allow individuals to legally have in their possession up to 10 grams of weed.

But even as the law is pending, Browne said he expects the attitude of law enforcement to the use of marijuana to change.

Speaking on his privately-owned radio station Pointe FM over the weekend the prime minister said, “I want to signal to the members of the police force, in the interim that they desist from incriminating individuals.”

He said this is “because the government has made its policy very clear. Even though the law has not been changed, at least they must respect the intent and to give those who use marijuana a break.”

He urged the police “not to take a puritanical position that we have not passed the law yet and therefore they have the right to incriminate these people. What we are trying to do is make sure that no one has a criminal record as a result of the use of marijuana.”

The prime minister expects that the decriminalisation of marijuana will take place “within a matter of weeks” and will also “wipe the records clear of every single Antigua and Barbudan who would have been convicted for the use of marijuana.”

The law is expected to limit smoking to people 18 years and older and smoking will not be permitted in public places.

The government also intends to embark on a public education campaign “to dissuade” marijuana use.

Prime Minister Browne said once the drug is decriminalised the question of supply must also be urgently addressed.

“If you going to facilitate the use, then the whole issue of the supply needs to be taken into consideration which means that at some point we need to look at the possibility of allowing for some controlled amounts in terms of marijuana plants being grown, at least to provide the supply. Failing this you will be importing marijuana plants from overseas.”

“I am of the view that there are certain individuals within the community who have been growing marijuana for many years to make a living. I am also of the view that if they didn’t have access to those proceeds many of them will be criminal elements in the society, hotting up the place. So why not provide them with licenses to grow marijuana on a controlled basis  so that they can continue to earn a living and to do so legally while at the same time supplying the demand to supply up to the ten grams.”