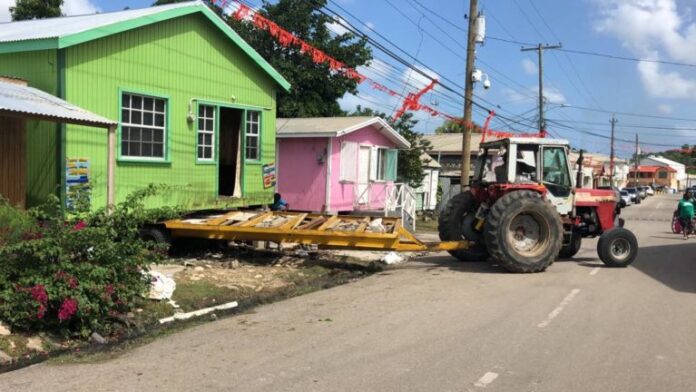 Prime Minister Gaston Browne said his administration intends to file a court order to remove at least five families still residing in Booby Alley in the Point, which is in his constituency.

The Booby Alley Redevelopment Project, a major initiative launched by Browne, has been stalled for several years as residents in the area protested any potential relocation.

The Prime Minister claimed that political operatives in the area have sought to undermine the housing project and that once the application has been filed in the court, it would take a week to be approved.

“I am saying to them now, my own constituents, I am doing this in the interest of the people and if these five members decide that they are not moving … we will get the court order, and the Ministry of Legal Affairs, if they have not filed already, they would be filing first thing [this] morning,” he said.

Meanwhile, during an interview with Observer weeks ago at a superyacht dock opening in the Falmouth Harbour Marina, Browne gave an update on the redevelopment project.

“My understanding is that they are going to tender now to select the contractor and that process is taking place in China.

“Whichever firm emerges as a contractor will come and do the design and technical work; after that it is completed, we will move into construction,” the Prime Minister stated at the time.

The Booby Alley Housing Project was announced in 2018 as part of a grant from the People’s Republic of China to construct 250 homes – 50 of which would have been in the Booby Alley area — but the project has faced several delays.

In 2018, the government first sought to compulsorily acquire lands in Booby Alley, where Browne was first quoted by Information Minister Melford Nicholas that “initial resistance is expected, but through a process of consultation he [expects] to sell the programme to the persons in the area who [will be] affected.”

However, resistance to the housing project has gone beyond the government’s initial assessment.

In 2019, in the midst of attempts to relocate the first family, a riot broke out at lower North Street after residents of the Villa and Point communities barricaded the street and started fires, which prompted the Prime Minister to visit the area in an attempt to restore calm.

They were standing in solidarity with their neighbour, Sharon Roberts, who they believed was being forced out of her home by the government.

Several months later, Roberts, announced that she was no longer prepared to resist the government’s requests, and her home was relocated to an area in Villa.

Then in 2020, the Parliament passed a motion to acquire seven parcels of privately owned land on Alfred Peters Street and in Booby Alley.

In 2021, Browne then proposed a land swap for people with vacant parcels of land in the St John’s City West constituency which would allow the government to build more temporary homes as part of the Booby Alley redevelopment programme.

Additionally, Minister of Public Works Lennox Weston also announced that construction work on the urban renewal project for the Booby Alley area was slated to begin in the first quarter of 2021.

Since then, some residents continued to hold out in defiance of the Prime Minister’s plan

In August 2022, at the signing of the Booby Alley Housing Projects Units Agreement between the governments of Antigua and Barbuda and the Peoples Republic of China, the Prime Minister again warned residents again to cooperate or face legal action.

He announced at the same signing that Barrymore Hotel on Fort Road was being refurbished to house the remaining Booby Alley residents.